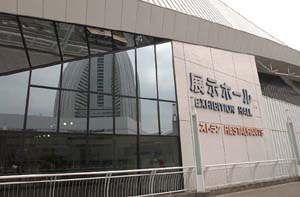 With every Pro Tour, a little history is made. In the case of Pro Tour Yokohama, we have an event that people will look back at years from now. There are veterans finally getting their moment in the spotlight, a player quietly dominating this season, rookies making a statement, two native players defending their turf and a legend reclaiming his spot as one of the game's best.

A few years back, Jon Finkel's moment in the sun seemed to be up. As Kai Budde racked up championship after championship, Finkel was demoted to "Second best player of all time", and even that seemed to be based more on past accomplishments than anything else. A relatively mediocre season led to Finkel falling off the Pro Tour gravy train, and he only qualified for Chicago off rating. He wasn't even planning to go, but found a good price for a flight at the last minute, showed up with minimal practice, and made the Top 4. This weekend he showed up once again without much preparation, and finds himself in the Top 8 for the second Limited Pro Tour in a row. The shadow of Kai Budde won't loom over Johnny Magic in Japan this weekend, as the German Juggernaut failed to make Day 2. It's been three years since Finkel won a Pro Tour back at Worlds 2000, but based on sheer talent he has to be the favorite to take it all tomorrow,

Magic has been popular in Japan for years, but for some reason, the Pros seemed one step behind the rest of the world. It wasn't until Tsuyoshi Fujita's Finals appearance at Pro Tour Tokyo in 2001 that Japan finally placed a player in a Pro Tour Top 8, and Akihiro Kashima was only other to accomplish it, making the Top 8 at Pro Tour Venice back in March. After today, the number of Japanese players in Pro Tours has doubled. That's right- two Japanese competitors will play tomorrow, and will be cheered on every step of the way by their fellow countrymen. Masashi Ooiso is the current leader in the Rookie of the Year race, thanks to Top 4 finishes at Grand Prix Kyoto and Utsunomiya. Craig Krempels has been on Ooiso's heels to take the title, and the race would have been neck-and-neck, but Krempels drew in the last round today and ended up in ninth place on tiebreakers. Tsuyoshi Ikeda is an old school Japanese player who has been around for a long time, and put up solid finishes throughout his career, including Top 16 at Pro Tour Osaka. This weekend he gets his moment, and in his own country.

Ben Seck has been on the Pro Tour for quite some time, and won Grand Prix Cape Town as well as Grand Prix Melbourne. Despite his Grand Prix success and the respect of his peers, Seck had never actually made money at a Pro Tour. Today he not only accomplished that, but he will also be the first Australian player to compete in a Pro Tour Top 8 since Tom Champeng won Worlds back in 1996.

Mattias Jorstedt has been on an absolute roll this season, with Top 8 finishes in Houston, Venice, and now Yokohama. His success is a testament to Sweden's strength on the Pro Tour, and the solidarity of Team Punisher. Three Top 8s in one season is the kind of consistency any Pro Tour player dreams of, and no one should be surprised if Jorstedt takes it one step further and wins the whole thing tomorrow.

Richard Hoaen is one of those players who has a lot of respect in his area, and eventually breaks out on the Pro Tour scene. He came twenty-second at Pro Tour Chicago, and made the Top 8 of the Magic Online Worlds Qualifier a few weeks back. He came today with a specific plan- draft Clerics. It worked perfectly yesterday, as he was the only player to go undefeated. He showed up today and drafted red/green in his first pod, and went 1-3. In the last pod he went back to the plan that brought him to the dance, forcing Clerics. He opened Infest, got passed Infest, was passed Cruel Revival second pack, and in Legions got a fourth pick Bane of the Living. Needless to say, this was enough to put the Canadian into the Top 8.

Jose Barbero and Ben Caumes round out the rest of the Top 8. Barbero is the third player from Latin America to make Top 8 of a Pro Tour, following Carlos Romao and Diego Ostrovich's storming of Worlds back in Sydney. He's had plenty of success on the Grand Prix circuit, with Top 8s at Curitiba and Buenos Aires, in addition to tenth place finishes at Prague and Sao Paolo. He also came in 48th at Venice, 53rd and Worlds, and has been a member of the Argentinean National Team twice. Caumes has had similar success on the Grand Prix circuit- the Frenchman represents the only other European in the Top 8 besides Jorstedt.

In this Top 8, North America, South America, Europe, Asia and Australia are all represented, making it the most diverse Top 8 in Pro Tour history. This shows that Magic is not only a truly international game, but that each area of the world has players capable of competing at the highest level. But, tomorrow will be about individuals, and one person will walk away with the championship trophy and $30,000.

Just keep in mind that the trophy's destiny may bring it anywhere, whether it's Argentina, Australia, America, Canada, France or Sweden. It may even stay put, right here in Japan.