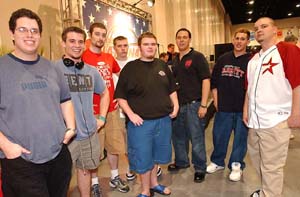 After two days and twelve rounds of competition, we have the Top 8 for US Nationals. Many anticipated a strong team for the Americans at Worlds this year, and the result has likely exceeded expectations. Brian Kibler went 3-0 in his Rochester Draft pod, making him a lock for Top 8 at 9-0. He conceded to Neil Reeves and Jon Finkel in the following rounds, and drew with Mike Turian in the last one. This tournament is a welcome change for Kibler, who has done very well on the Grand Prix circuit and placed solidly in Pro Tours, but has not made the Top 8 of a Pro Tour since Chicago 2000. While US Nationals is not a Pro Tour, it has long been considered one of the hardest tournaments of the year, perhaps even more difficult than a Pro Tour. This finish puts Kibler back into the forefront of the spotlight, a place that he obviously loves to be in.

Neil Reeves finished the swiss rounds at the top of the standings. Long considered one of the best Limited players in the world, Reeves ran an Upheaval/Infestation deck designed by Zev Gurwitz in the Standard portion of the event. Gurwitz feels that Psychatog is not good in the current environment, because it dies easily to black removal spells packed by both Zombie decks and mono-black control, and blue/green can just fly over it with Wonder. Additionally, Zombie Infestation costs one less than Psychatog, allowing for a cheaper and quicker "combo kill" with Upheaval. Interestingly, Gurwitz gave the deck to Reeves the night before the tournament, and talked him out of running Engineered Plague in the sideboard. Neil has been lamenting that choice all weekend, and was especially regretful after seeing the Top 8 brackets, noting that they are filled with Zombies and red/green.

Jon Finkel will return to very familiar territory tomorrow. Many considered Finkel's best days gone, until he showed up to Pro Tour Chicago on a whim, and placed in the Top 4. After the event, many speculated that the Finkel of old was back, and if that's true, it's only appropriate that he returns to the Top 8 of US Nationals. This will be Finkel's fourth time playing on Sunday at a Nationals, and out of his previous three appearances, he made the team twice, and won the whole thing once. Jon started off the tournament yesterday with a 4-2 record, but went 5-0-1 today to make Top 8. Without a doubt, Finkel is back, and American Magic players will certainly be cheering him on to make the team.

The massive CMU/TOGIT team has been putting up impressive finishes in the past few events, and this one is no exception, with veteran Mike Turian and Pro Tour breakout star Jordan Berkowitz both playing tomorrow. The team showed up mostly playing Wake and red/green this weekend, and both of their Top 8 representatives will be running forests and mountains in front of the cameras tomorrow. Turian is a former Pro Tour Champion and has been a well-respected player for quite some time now, but this finish is very important for Berkowitz, who just recently had his first big tournament by placing in the Top 4 of Pro Tour Venice. This adds another Top 8 to his resume, and shows that Venice was not a fluke.

Your Move Games, America's other high profile team, will be represented tomorrow by Justin Gary. Gary has Masters, Pro Tour and Grand Prix victories to his name, and even won this very tournament back in 1997. Six years later, he finds himself back in the Top 8, looking to once again win the US National title. The 1997 US National Team, which also featured Bob Maher, was the first United States team to not win at Worlds. Gary is certainly a much better player today than he was back then, and one would think he'd like to return to the National Team, and emerge victorious this time around.

Rounding out the Top 8 are this year's two "relatively unknown" players, Joshua Wagener and Gabe Walls. Wagener has had his fair share of success, with a third place finish at JSS Worlds a few years back, and a recent Top 8 and Grand Prix Boston. Walls has played in many Pro Tours, but has never placed in the money. He describes himself as a money draft specialist, but will need to play Constructed tomorrow. Surprisingly, the Pros actually have Walls pegged to win the tournament tomorrow. Because the field is packed with creature based decks, and his bracket is especially loaded with red/green, the anticipated result is for Walls' Slide deck to simply crush the opposition.

In other news, Tom Guevin played a 12th round Feature Match against Chris DeMaci that got particularly ugly after the judges made a ruling that didn't sit well with Tom. Both players traded insults back and forth, with Guevin coming out on top in two games. DeMaci initially refused a handshake once the match was over, then offered one before pulling his hand away as Guevin reached out. Guevin's response was to shout, "Ya got me! But I got the match, so it doesn't matter." This whole situation must have made things even harder on Guevin, who came in ninth on tiebreakers. Joining him in the "missed it by that much" category is Craig Krempels, who came in tenth. This has to be particularly heartbreaking for Krempels, who just recently came in ninth on tiebreakers at Pro Tour Yokohama.

Looking at the field, it seems that America will be the favorite going into Worlds. With names like Reeves, Kibler, Finkel, Gary, Turian and Berkowitz, the Top 8 is packed with players who certainly know how to win. Even Wagener looks like a potential breakout star, while Walls is a wild card with the matchups seemingly in his favor tomorrow. The Magic community will definitely be watching tomorrow, eager to find out who will represent America in Berlin. Germany took the team title from the Americans last year in Sydney, and now the Americans have the opportunity to take it right back from them in their own country. The only thing left to find out is which three players will earn the right to attempt it.