a grueling sixteen rounds of play in a format that has everyone talking, the Top 8 is set for tomorrow. When the lights go on and the cameras go into focus, there will be three French players, all running "The Clock", a combo deck that revolves around Mana Severance and Goblin Charbelcher. Thanks to plenty of tutoring capabilities in the form of Tinker, Intuition and Vampiric Tutor (as well as Brainstorm), the deck can apparently win on turn three around 45% of the time. When all is said and done, this is likely to be the deck that is talked about when Pro Tour New Orleans 2003 is discussed in the annals of Magic history. Of course, it doesn't hurt that three of France's top players will be running it. This will be Nicolas Labarre's fourth Pro Tour Top 8, his first being back at Pro Tour Rome in 1998. Gabriel Nassif will continue his incredible run over the past year tomorrow, and add even more credibility to his growing reputation as one of the best in the world. Yann Hamon is the third Frenchman playing Charbelcher in the Top 8, and to say he's having a good fouteen days would be a massive understatement- he just won Grand Prix Lyon last week, which featured over a thousand players. These three players are definitely the ones to keep an eye on tomorrow- they have an incredibly powerful deck, and the skill to succeed with it. 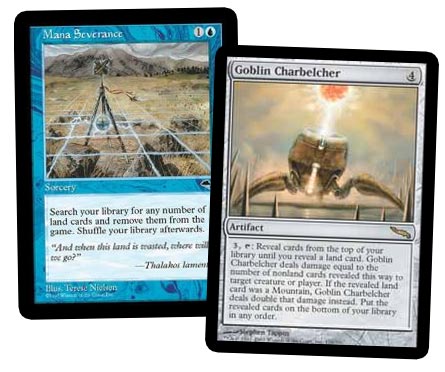 Aside from the strong French presence in the Top 8, there are also two Japanese players set for Sunday. The days of Japan being notorious for just missing Pro Tour Top 8's are long gone- now, it's become a standard occurrence. In fact, this is the fourth individual Pro Tour in a row where a Japanese player has made Top 8. This is Tomohiro Yokosuka's second Pro Tour, and he's already made it to the top stage. The recent college graduate's first Pro Tour was Yokohama, where he placed in the Top 32 to qualify for this one. Needless to say, this sort of consistency makes him a player to watch in the future. Joining him tomorrow from Japan is last season's Rookie of the Year, Masashi Oiso. It was only back in May when Oiso made the finals of Pro Tour Yokohama, and now he's returned to the Top 8 to prove that it wasn't a fluke. What's even more impressive is that he's now made a Top 8 in both Limited and Constructed events. Yokosuka will be playing Psychatog, and Oiso is running Tinker.

Rickard Osterberg has followed up September's Pro Tour Boston Finalist finish with a second Sunday finish in a row, running the red/blue Tinker Stax deck. Hans Joachim Hoh will enter his first Pro Tour Top 8 tomorrow as first seed with a mono-blue Tinker deck. Rounding out the Top 8 is the lone American, Eugene Harvey. Just like Osterberg, this will be Harvey's second Sunday appearance in a row. He also had a Top 8 last season in Chicago, but this is his first Constructed Pro Tour Top 8. This is not to say that Harvey won't be prepared, as he was successful in a best three-out-of-five Constructed scenario when he won U.S. Nationals.

While much of the buzz leading up to this weekend circulated around Tinker, the results showed that the format is not one-sided towards a specific deck, at least at this event. Aside from mono-blue Tinker, Team Punisher has a red version called "George W. Bosh" starring Goblin Welder, Gob-Vantage with or without Goblin Charbelcher, the Mana Severance/Charbelcher "Clock" deck, Food Chain, Psychatog, Angry Hermit and Scepter Oath. Yes, the format is fast, but it doesn't mean that there aren't creative options. In fact, Tinker didn't have the most numbers on Day 2, but it was the power of Goblin Recruiter and Goblin Ringleader that was most successful.

A significant impact on the event was the fact that this weekend's days of swiss competition featured eight rounds instead of seven. As a result, the usual 4-2 then draw into the final round tactic wasn't viable, and competitors had to play in order to advance. Without a doubt, more playing and less drawing is a good thing. Additionally, extra rounds reduce the impact of bad draws or poor matchups by giving players a little more breathing room. An added element of having an extra round every day is that endurance becomes more important. For example, Eugene Harvey noted that he made a mistake in the final round of day one that he chalked up to fatigue. It will be interesting to see how the extra rounds affect players in the future; with another hour required to stay focused and play Magic, the night before a Pro Tour may become more about business and rest for many players.

Tomorrow will be the end to an exciting weekend of powerful decks, and plenty of interesting stories. Check Sideboard.com for all the details, as we write another chapter in Pro Tour history.