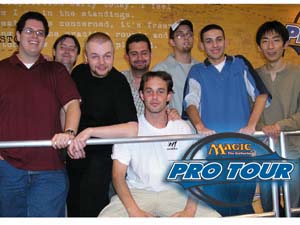 Reports of the demise of American Magic have been greatly exaggerated. Tomorrow, three of the eight players in the Top 8 will be playing on home soil. Mike Turian says this is his last Pro Tour, and if that is the case he's certainly going out in a blaze of glory. Turian has never won an individual Pro Tour, so a victory tomorrow would be a nice way to conclude his career. As tomorrow's rounds are played out, it's very possible that Turian will have more support in the crowd than any other competitor. If he is the nostalgic veteran pick for tomorrow, then Ben Stark is the man to watch for the present and future. After paying his dues on the Grand Prix circuit and improving his game, Stark has quickly become one of the best American players on the Pro Tour. Considering that this tournament signifies a revival of sorts, it's only fitting for him to be right there in the trenches, with back-to-back Pro Tour Top 8 finishes. Filling out the ranks of the Americans is Mark Herberholz, a Michigan native who has apparently picked up a thing or two from Pat Chapin and Eric Taylor. He's been at a lot of events, but this is his first big finish.

Of course, that's not to say that Europe has gone away. At the top of the standings is Nicolai Herzog, who has been doing consistently well in every Limited Pro Tour over the last few years. This culminated with his Pro Tour victory at Amsterdam, and he now has a chance to win it all again in the same season and run away with the lead in the Player of the Year race in the process. Antonie Ruel will also be playing tomorrow, adding another top finish to his career. Angel Perez del Pozo from Spain came to San Diego this weekend unsure of what would happen at his first major tournament, but he weathered the storm of some of the toughest draft pods possible to earn his way to tomorrow's elimination rounds. Anton Jonsson has added yet another Top 8 to his resume, and continues to be incredibly consistent. In fact, he has gone to day two of a Pro Tour eight times, and on four of those occasions he made the Top 8.

Oh, and Masashi Oiso continues to steamroll his way through the competitive Magic scene. Only a rookie last year, Oiso now has three Pro Tour Top 8 finishes to his name. Masashiro Kuroda may have finally won the big one for Japan in Kobe, but at the moment Oiso is arguably the best Japanese Magic player in the world and he's looking for a title of his own tomorrow.

But the biggest story of all may be the impact of Mirrodin Block Limited. Pro Tour Amsterdam was the last Limited Pro Tour before San Diego, and Herzog, Turian and Jonsson all played in that Top 8 as well. They're in the same spot here, which speaks volumes about the skill level of Mirrodin draft. The common consensus seems to be that card evaluation is still evolving, and the better players have been able to stay ahead of the learning curve. No matter what the theories, you can't argue with consistency. The fact that three players have returned to the Top 8 in this format once again is proof that luck is far less of a factor than one might sometimes imagine, and that Mirrodin block has created a very healthy Limited environment.

So who will take home the championship trophy tomorrow? Will Herzog make it back-to-back Limited Pro Tour wins? Will Oiso give Japan back-to-back Pro Tour Champions? Can Turian finish up his career with a milestone by winning his first individual Pro Tour? Will Jonsson achieve that elusive feat for the first time himself? Will Stark solidify his status as the future of the game? Will Antoine Ruel win his first Pro Tour? Can Perez del Pozo or Herberholz will win a Pro Tour on their very first try? Watch our live streaming coverage beginning tomorrow at 9:00am PST to find out how the Top 8 unfolds!