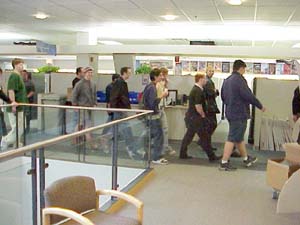 Part of the fun of the Invitational, from a player's perspective, is the opportunity to explore some of the more exotic corners of the earth. Having traveled to the six non-glacial continents, the decision was made to make the move to cyberspace. It was not greeted by whoops of enthusiasm from those hoping to attend. Seattle isn't as exotic as, say, Cape Town or Kuala Lumpur. But there was an upside: the opportunity to run wild through the halls of Wizards of the Coast.

The players drifted in a few at a time on Wednesday, collecting at the Hotel. Thursday would be the big day of exploration. They were given a merciful 10:00 am start time. Only Tomi Walamies had not yet arrived. He would be turning up ... eventually.

The breakfast room at the SpringHill Suites was a little busier than usual. What few suits dared step into the breach quickly scurried away from the buffet with their muffin and coffee. It was late enough in the morning that the Invitationalists were their usual animated selves. Free food and appropriate company only fueled their fire. Gamers in full effect are not something the average human can stomach. Any more taken aback and the innocent bystanders would have been all British accents and "Well I never!"

A quick stroll through the fog-shrouded morning and they arrived at the Wizards of the Coast offices. There, the Invitationalists were shown the two rooms of computers they would be playing in. After a quick tutorial, most were already quite familiar with the wonders of Magic Online, the players were given free play time. They ate it up. Everyone wanted to play, throwing down with the Auction decks at random. They practically had to be dragged away. 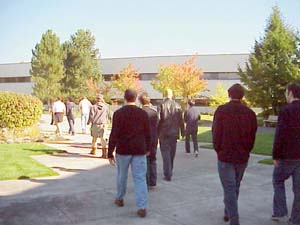 The most anticipated part of the day, aside from free dinner, wa the Tour of Wizards itself. It was like a real-life Charlie and the Chocolate Factory. Gary Wise made a fine Augustus Gloop, and couldn't restrain himself when faced with faced with the wonders of Research & Development. He practically had to be held back lest he break past the barricade, stuff his pants with top-secret documents and run laughing into the Renton countryside. Eivind Nitter and Olivier Ruel were somewhat more sneaky, getting conveniently "lost" along the way.

They continued through the heady paradise, with games and game paraphernalia everywhere you looked. Eventually they found people at work.
Contrary to popular belief, actual work does go on at the Wizards offices. Any chance at productivity was sabotaged as the players sprawled in and around cubes, eager hands picking up anything that wasn't bolted down. Eventually they found candy and wandered away. 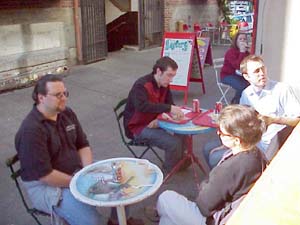 They even visited the gym, where much fun was had at the stereotypical gamer physique. The tour was almost derailed when getting to the gym meant following Mark Rosewater through the Men's Room. Their fears were calmed, and things proceded, though not without a few more jokes. Things wrapped up with a trip through the gardens.

From there it was off to bustling Seattle, where the Invitationalists were set loose on the unsuspecting city. They broken into small groups and wandered, somewhat aimlessly, for a few hours. They would have rather used the time to play still more Magic, preparing their decks for the constructed formats.

The day was closed with dinner at Cutter's, a highbrow seafood restaurant. The staff were patient with what were by now a very high-energy group. Tomi Walamies showed up to cheers that silenced the rest of the diners. Everyone walked away stuffed. From there players were free to go where they wished. Some took in the nightlife, and others took in a quick draft. All in all, a pretty good day.