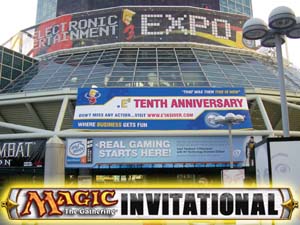 E3 is proving to be quite a spectacle--lights, sounds, scantily-clad ladies tossing T-shirts and demo disks to drooling mobs of gamers, giant screens previewing the latest and greatest fighting and role-playing and RTS games, and reporters and photographers taking it all in. Here in Magic-land, Bob Maher is putting on a spectacle of his own, continuing to run the table in every format.

The Great One is now a perfect 10-0, thanks in large part to his amazing Eighth Edition Rochester Draft deck that featured Royal Assassin, Thieving Magpie, and lots of other goodies. (A little of his success is owed to Brian Kibler's horrific misclick in Round 9- see the Feature Match coverage for the grisly details.)

After a long break (during which Osyp Lebedowicz and Justin Gary were interviewed for Playboy TV… no jokes… my oh my… you'll probably be hearing more about this at a later time…), the formats switched gears to Mirrodin block constructed. Some brave souls, including the Japanese players, decided to run Ravager Affinity right into the sea of hate. But most players opted for Arc-Slogger and Pulse of the Forge. The mirror match technology--used by Maher in his 10th straight win, over Gary Wise--is simply more gigantic creatures, including Megatog and Vulshok War Boar.

Tomorrow: More MBC, the wacky world of Online Extended, and who will Bob be facing in the Finals? Plus, a walk around the madhouse that is E3... Be here!