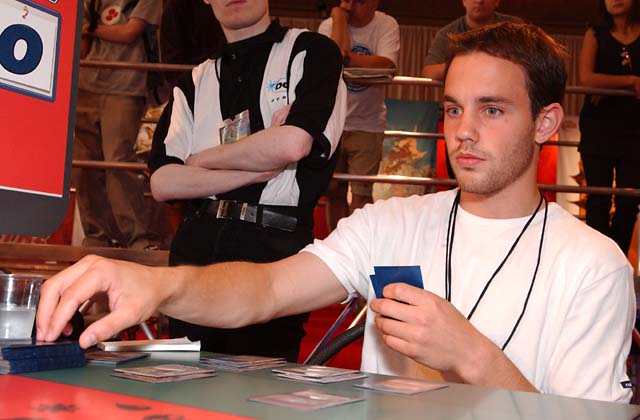 Antoine Ruel was first seed in the individual competition

Day 4 of the World Championships Competition is, for the most part, the last day of the National Team playoffs, to see which two countries are able to pull into the lead after three days of individual play and play for the championship on Sunday.

Having just finished the Team Pro Tour qualifying season for this year's Pro Tour-New York, there is certainly enough information about drafting Invasion-Planeshift-Apocalypse for teams, though there is a high level of challenge remaining simply due to the difficulty of drafting these three sets. While Invasion and Planeshift follow a very simple and obvious theme, making it very easy to draft the two together, Apocalypse takes that same theme and turns it around, having the exact opposite effect of that started by the first two sets of the expansion.

Player B for the starting team opens the team's pack, and both Player B and Player C get to choose a card from the pack before sending it to the opposing team. All three players from the opposing team get a pick, then the third player of the initial team 'wheels' two cards before sending it back to the opponents. For the second pack and each successive pack, the pack is opened by the next player down the line; in pack number two Player C from the starting team gets one pick for himself (or for the team, in the case of a card too powerful to let the opposing team have) before letting the opponents get their three picks, with the other two members of their team getting two picks each before returning what is left for the opponents to pick through.

Many of these teams have been practicing for Pro Tour-New York anyway, and therefore have had access to a good playtesting group for the draft portion of the event, and the standard decks the professionals seem to favor for this draft format is to give a blue-white control deck to the center player, since it is a strong color combination in all of the packs, and to the minds of many it is considered to be the best deck to draft in the Team Limited format. Green, of any different number of splash colors, is generally given to the last player at the table, since that player has access to all of the first-picks for the team and can draft anything at all rather than pass it to the opposition. Given that green, blue, and white are covered already, and red is very strong in Planeshift, the A player for the team is 'traditionally' given a black-red deck, or at least this is the strategy used by most in this format, as could be seen in recent weeks at such high-level events as Grand Prix-Columbus two weeks ago.

But there is always the elements of metagaming and chance, and this notion of forcing colors is not always one that can be supported by the first few packs that are opened. Instead of drafting with a structured plan, the leading competing draft theory is just to draft free-form and allow the packs to dictate entirely what the team should do with the packs they have opened. The pro's seem to like this idea less, but it certainly has its loyal followers, and given a high level of knowledge about all of the cards in the format and their strengths it can be just as successful. And in addition to having your draft strategy arranged to counter the luck of the packs, you can likewise order your draft at countering your opponents' decks, choosing a color combination that generally has improved chances against what the opponent has drafted so far. This usually involves trying to put your team's black-red deck versus the five-color green deck, blue-white versus the black-red deck, and the five-color green deck versus the blue-white deck, using the strength of bombs to overpower their best deck and getting favorable matchups for the other two decks. And those are just two of the possible strategies, though perhaps the most popular.

There are plenty of unanswered questions, such as whether it is better to have your team pick first or pick second... the correct answer depends on what you intend to do during the draft portion, but each has its advantages: picking first gives you the best ability to use the first-pick-quality cards from Invasion, such as a Master or Dragon, while picking second gives you the best ability to force colors... either the ones you want, or to force colors against what your opponent seems to have drafted so far. Perhaps some of these questions will be answered today, but in all fairness it might not even be answered by Pro Tour-New York which is correct for Invasion-Planeshift-Apocalypse draft, where many teams are just trying to forestall disaster.