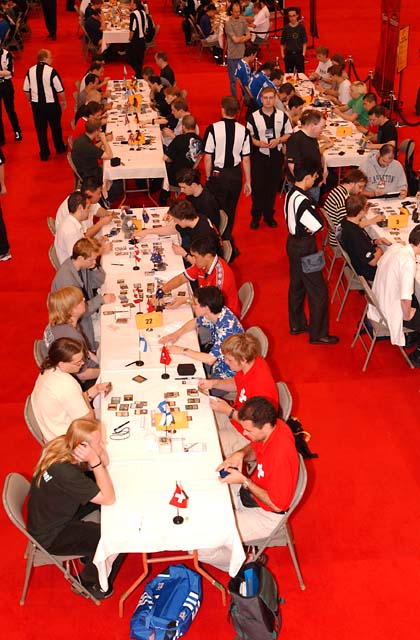 As always, Saturday was Team Day at Worlds. This year worked a little differently than previous years, though. The National teams are now composed of only three players (not four) and the team competition uses the Team Rochester Draft format, not Team Sealed Deck. The new format worked out much better and everyone involved seemed to agree that team Rochester is simply a better format, more fun and more skill testing. There were a few complaints about the precise number of points attached to each match, but all in all the day was a great success.

When the dust finally settled, Team USA completed its comeback from 43rd place at the end of Day 1, and claimed the top spot in the standings. Of course, now that Trevor Blackwell, Brian Hegstad, and Eugene Harvey have gotten themselves into the finals, they have to break out their Standard decks again. Those decks got them 6 wins and 12 losses on Wednesday.

Squaring off against the 5-time champions will be Team Norway. With 2000 Euro's champion Nicolai Herzog leading the way, Norway swept Australia in the final round to leapfrog from 5th place all the way up to 2nd.

Here's the bizarre part - Norway also went 6-12 in Standard! Jan Pieter Groenhof paced them at 3-3 while Oyvind Odegaard managed one win and Herzog put up two. Herzog actually misregistered his Standard deck. He only wrote down 56 cards in his main deck because he forgot to write down "4 Rishadan Port." When the judges caught this on Wednesday, they applied the standard penalty (a match loss) and then allowed him to play out the rest of the day with basic land of his choice filling his deck out to 60 cards. That's how he'll be playing on Sunday in the finals too. The other members of the Norwegian team are Oyvind Odegaard and JP Groenhof.

In between the individual semifinals and finals, these two teams will brawl to see who claims the title. Public sentiment seems lined up with Norway and this competition has turned into a sort of U.S. versus the world affair since the Americans have 5 of the 6 titles. Here's how the matchups line up:

Nicolai Herzog (2-4 in Standard) is running Machinehead. It was designed in part to feast on a field full of green-blue Saproling-Opposition decks, but on Sunday he gets the matchup he's probably tested a million times: good 'ol Fires.

Trevor Blackwell (0-6 in Standard) is running Dark Fires. He basically took the deck he used to win U.S. Nationals and added in Spiritmonger, Fire/Ice, and Thunderscape Battlemage.

Oyvind Odegaard (1-5 in Standard) is running Dark Fires. His build is very similar to Blackwell's except that Odegaard runs Ghitu Fire where Blackwell has Thunderscape Battlemage.

Brian Hegstad (3-3 in Standard) is running Saproling-Opposition. His deck was designed with Fires specifically in mind, so this matchup should favor Team USA.

JP Groenhof (3-3 in Standard) is running an unusual red-green Ponza deck. I say "unusual" just because it's not something that has been part of the recent Standard metagame. It's actually a old-school throwback: red-green land destruction. Llanowar Elves and Birds of Paradise accelerate him to fast Stone Rains and Pillages. Then he filled the deck out with fatties and burn. It doesn't get much more old school than that!

Eugene Harvey (3-3 in Standard) has stuck with the traditional red-green (only) Fires deck that earned him third place at U.S. Nationals. He hasn't really changed his decklist since before 7th Edition came out.