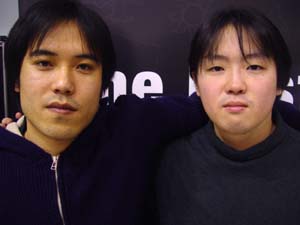 After eight rounds of competition, Japanese Magic powerhouses Itaru Ishida and Osamu Fujita stand on top with perfect 8-0 records. Fujita is coming off an ironically appropriate second place finish at Pro Tour Amsterdam last week, and is in prime position to make a run at the Top 8 tomorrow. He didn’t lose a match playing Goblins, still featuring and Goblin Matron despite the loss of their Recruiter. Blood Frenzy was the tech card for the deck, taking down Psychatogs in combat before they became lethal, or just forcing through the extra damage necessary for a win. Pro Tour veteran Itaru Ishida achieved his undefeated record with a blue-black Reanimate deck that is similar to the version Kai Budde popularized.

Grand Prix Okayama is the first major event to feature the Extended format after the new bannings, and even though some players were complaining that the environment is still too fast, the top of the standings shows that there is still plenty of room for creativity. Jinpei Hassaku, who unleashed -Explosion on the world a while back, ends the day in ninth place with Psychatog. Notorious rogue deck designer Kiyoshi Sasanuma defied convention once again, running a green-white beatdown deck to a twelfth place finish, and old-school hero Satoshi Nakamura broke out Spellweaver Helix to end the day at eleventh place.

Yet, the biggest story coming out of the tournament has to be the emergence of as a strong combo deck. It features multiple combinations that can produce an infinite life loop, and wins with Test of Endurance or Serra Avatar; tutor cards provide the consistency that a combo deck needs to be successful. Masami Ibamoto designed this version, and of the four players that ran it, three will play tomorrow- Ibamoto, Ryuichi Arita and Akira Asahara.

Tomorrow will feature six rounds of swiss, and then the Top 8 will play out to see who will emerge as the Grand Prix Champion. Will Satoshi Nakamura run over the competition by Spellweaving Crush of Wurms? Can Ibamoto, Arita and Asahara ride the momentum of the deck to big finishes? Can Osamu Fujita finally come home with a trophy that isn’t silver? Check out our live coverage tomorrow to find out.