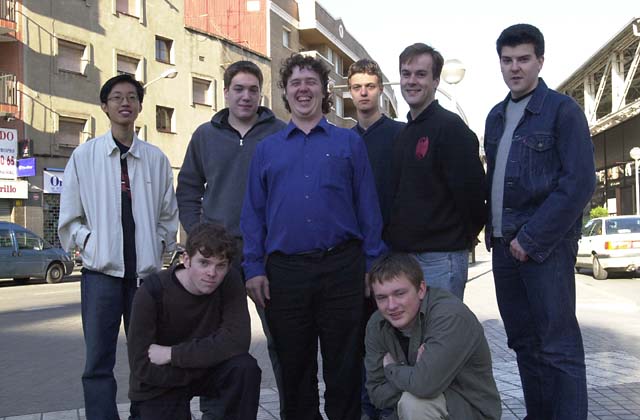 The Top 8 of Pro Tour Barcelona

It's easy to underestimate the pressure on player in Top 8 contention. If you need to win your next three rounds to make it, then victory ratchets up stress instead of easing it. The final round is an absolute backbreaker. The ability to endure it is one of the most amazing abilities of the professional player.

Of the eight players featured in Round 14's coverage, all but Finkel were a win away from the Top 8. Even Kai Budde needed a last-round win, and he had entered the final draft at 10-0-1. But Chad Ellis, Yuri Kolomeyko and Brad Swan needed to run their tables to come back on Sunday. They managed to shelve their fears and play their best, and were rewarded for doing so.

The Top 8 is an interesting collection. On the one hand you have Pro Tour fixtures, like Budde, Dan Clegg and Alan Comer. Budde has a chance to be the first pro to win three Pro Tours. Comer was once a consistent Top 8 finisher, but work concerns have threatened to remove him from the gravy train. His Top 8 secures his place for the coming season.

On the other hand, the remaining five players are in their first Pro Tour Top 8. Kolomeyko became the first Ukrainian to break in, and Albertus Law the first Singaporean. Law is definitely a player on the rise, his Top 8 coming on the heels of his Top 16 at Tokyo. This joins Fujita's finals appearance at Tokyo as further evidence that the APAC region can compete at the highest level.

Brad Swan is the younger half of the dynamic father-son team of Swan & Swan. His dad won Grand Prix-Boston earlier this year, and that was all the incentive he needed to run the field.

Chad Ellis is a member of Team Your Move Games, and an all around nice guy. When his name was announced he was literally overcome by the emotion of it all. He gave Sideboard Content Manager Omeed Dariani the hug of his lifetime.

Patrick Mello is Budde's teammate as well as roommate. He won money at his first two Pro Tours, but went through five consecutive singles Tours without earning a cent. That trend stopped today.

Many believe that a strong performance from Budde will give him the Player of the Year title. There are only five events remaining that will count, four Team Grand Prix and the World Championships. His competition was hardly slacking, however. Kamiel Cornelissen placed twelfth, and Scott Johns ended up thirtieth. The top three players gunning Rookie of the Year gained no ground on one another. All made Day 2, but none finished higher than ninety-sixth.

Jon Finkel proved that he was still Finkel, despite missing Top 8. He finished eleventh. To get there, he had to crush the dreams of Raphael Gennari. Barcelona was Gennari's sixth Pro Tour, but his first Day 2. In a cruel twist of fate, he was one win away from the Top 8, in his first Feature Match, and he was forced to play the game's living legend. They split the first two games and he Probed Finkel early in game 3, but had no answer for Benalish Heralds.

The day wound down with the semifinals of the Masters. Zvi Mowshowitz squared off against Jay Elarar's tricked out green-red beats. He got manhandled. He was one turn too slow in the first game, and double-mulliganed in the second. In contrast to the previous day's marathon, the whole affair took fifteen minutes.

Even the match between Ben Rubin and Jon Finkel was quick by comparison. This match was their fourth Top 8 encounter, with Finkel having taken the first two, and Rubin battling back with a win at the Chicago Masters. They each represented the tournament's most popular decks, Rubin with Domain and Finkel with Go-Mar.

Rubin capitalized on a slight mana stumble from Finkel in game 1, but the results were slow in coming. He built his advantage until he could force Finkel into a series of losing confrontations. He took the game with two cards let in his library. The second game was much less interesting. Finkel mulliganed into a mana-light draw, and Rubin attacked five times with a Kavu Chameleon.