Two strange and interesting decks managed to come close to making Day 2 at this internationally attended event. Jon Hochberg and Sol Malka cannot be entirely pleased with their performance; one more win for either and they would have been at 18 points, which got some people into Day 2. However, they can be proud with their innovative approaches to this brand-new format. It's also interesting to note that both Jon Hochberg and Sol Malka, the two subjects of this feature, actually tested for this event together.

Jon Hochberg's deck is close to a classic white weenie deck, and also Team Punisher's eponymous Worlds 2002 deck, modified for this environment. It's so neat to see Savannah Lions being played again! Hochberg's quick creatures, like the Lions and the Spurnmage Advocate, provide an early offensive punch, while Silver Knights are golden against Goblins. Exalted Angel slides into the curve neatly as a huge flier for little mana, and Battle Screech is just plain good and always has been.

Hochberg has tons of options with his spells, too. He can slam down a Glorious Anthem or two and benefit from the boost to his white creatures. He can strategically stop spells with Mana Leak and Stifle. And if things go poorly, he can hide behind a Worship and bide his time. Hochberg's deck also has numerous sideboard options, ranging from Circle of Protection: Red in the Goblin matchup to Karma against Zombies.

"I knew what the metagame was going to be," Hochberg said. "I thought the field would be split between Wake and Goblins." He figured that this deck would have the best chance of beating both of them. He's had great success with the white weenie archetype (he's been playing since 1994!) and he's really enjoyed playing it throughout the years.

He won a feature match yesterday, and started out 5-0 with zero byes. "I got really unlucky," he commented. "I had a matchup against Goblins which turned out to be against one of the people who went 8-0." Best of luck in the future, Jon!

Would you expect the creator of The Rock and His Millions to play anything but swamps and forests? 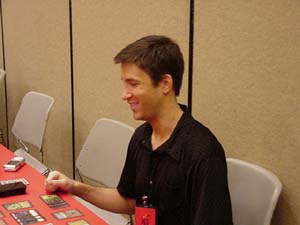 Sol MalkaYou'd be silly to do so. Malka may have added mountains to his repertoire, but the core of the deck remains basic black and green. Malka's deck doesn't look very cohesive at first glance, but delving deeper provides much more insight.

Ravenous Baloth becomes even better with a Genesis in the graveyard. Call of the Herd provides additional creatures, and Malka can easily play it on the second turn with help from Birds of Paradise. Cabal Therapy and Chainer's Edict strip cards and creatures away, and four Burning Wish enable Malka to keep flexible options in his sideboard.

This sideboard includes cards like Epicenter and Recoup, which are not cards that you would normally see in normal sideboards. Malka's deckbuilding insight is far from normal, though, and that innovation tends to pay off for him. It's unfortunate that it didn't work out as well this time, with just one win needed for him to make Day 2.

4 Call of the Herd 1 Buried Alive