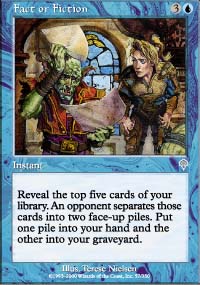 The best way to look at Kamiel Cornelissen's Counter Rebel deck is as a U/W control deck that uses a rebel chain for its kill mechanism. A number of factors support this interpretation. He has more blue sources than white, the better to support his eight counterspells. He has global resets in the form of Wrath of God and Rout, as well as card drawing with Fact or Fiction and Brainstorm, which fakes a mean Ancestral Recall with the shuffling of rebel searchers.

The question is, if it borrows so much from traditional U/W control, why not go the whole hog? What does the rebel chain bring to the table?

For one thing, the recruiting mechanic of the rebels is synergistic with countermagic. It allows you to keep your mana open to counter your opponent's danger spells and still develop your board if they don't cast anything. It's also card-advantageous, letting you fill your hand with rich, creamy justice, and not expend cards stopping your opponent's board.

As well, it gives the deck an early game. One issue with using Blinding Angel as your kill card is that you can't take advantage of a slow draw from your opponent. This deck punishes a threat-light hand by turning on the rebel fire hose and overrunning its opponent. It can also play defense if need be, with Defiant Vanguard being just dandy against early creatures, no matter how big. 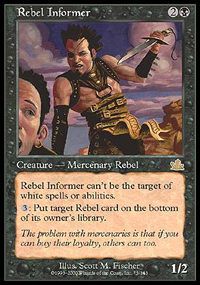 Another key feature of the chain is that it gives access to Rebel Informer. Nearly a third of the field at Chicago was playing rebels of some description, and having one in the main deck gives the deck a lot of favorable matchups.

Of particular interest is the number of spells appearing as one- and two-of's, illustrating the trade-off between consistency and variety. It's a dangerous proposition, though; what if you draw Rout when you only have four mana, or get Disenchant when Dismantling Blow would net you the cards to win the game? On the other hand, the rewards can be spectacular, catching the opponent off guard with an unexpected spell or leading them into false assumptions about the composition of your deck.

Let's face it, though. It's hard not to look at the two Fact or Fiction and say, "what's up with that?"

Cornelissen's sideboard works to homogenize his deck against specific opponents. It features more Wrath-effects, more Disenchants, more Dominates and more Fact or Fiction, allowing him to focus his deck to deal with specific threats his opponent brings to bear. Prohibit gives him an inexpensive way to fight counter-wars, as well as being good at stopping dangerous early plays. Circle of Protection: Green can shut down the offence of the dominant Fires decks.