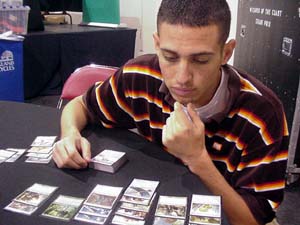 Stark has not lost a match on Day One of a Grand Prix since Mirrodin was released. Without so much as seeing the cards since the Prerelease, prior to arriving at Grand Prix: Kansas City, he rolled off eight straight wins on Day One. He went on to parlay that performance into a Top 8 finish. He proved himself equally adept at Constructed when he mirrored his Kansas City feat with a 7-0 run on Day One and another Top 8. Granted he had three byes each time but that should take nothing away from the young man who is coming to be regarded as one of the elite American players.

Ben sat down in the Feature Match area to construct the deck he would be wielding this weekend. Once again he had three byes and would not have to face live competition until the fourth round. He had not seen any Darksteel cards until last night and was relying on friends to help him understand how to value the cards. "I actually went to the Mirrodin Prerelease but no Darksteel. People told me what is good though."

Ben should feel confident in the advice of his people since he was recently added to the powerhouse CMU/TOGIT mailing list as their newest member. "I am a little worried about DeRosa though." He was referring to the gregarious Antonino DeRosa. "I saw him playing with Darksteel Pendant last night. That card can't be any good, right? Plus, I am teaming with the guy for the Team Pro Tour and he puts Goblin Striker in every deck!"

Ben began by sorting out his deck's chaff and tossing it in a pile. With Mirrodin it was an automatic process and he whipped through that portion of his cards in a crisp practiced manner. He slowed down when he reached the new cards. He had to read each Darksteel card and consider which pile to put them in. Surprisingly he did not immediately toss Drooling Ogre onto the scrap heap. "He is probably not at all playable but I tend to play affinity." He smiled at his four artifact lands and considered the Ogre some more before tossing him aside.

"Dear God! Is this card good or not?" Ben was referring to the Eater of Days. "If they can't kill it you definitely win-what are they going to do with the extra turns? Attack you?" Ben set the 9/8 flying trampler aside and plowed forward with the rest of his cards. "I hear these guys are good," he muttered as he laid out a pair of Arcbound Bruisers. As his deck unfolded Ben did not like the shape it was taking.

"I don't like to rely on artifact men because all the good decks have so much removal. My Kansas City deck was so good because it had things like triple Tel-Jilad Archers-not like this deck. I do like that my deck does not have any equipment. In Sealed Deck people are all about playing with Turn to Dust and Unforge, which will be dead draws against me."

As Ben's deck took shape he found himself looking a green-black build with some decent removal that topped out at Plated Slagwurm. His first pass also included a small red splash for Detonate and Echoing Ruin. "It definitely needs to be green-black. I can splash whatever…" He took a quick inventory of his playables and came up with almost thirty cards, "I probably won't splash."

"My teammates always yell at me because I will try to build a decently curved deck in two colors. They always want me to splash more." With the two red cards put off to the side-for now-Ben looked at some of his black creatures that had been warming the bench in the previous build. He held up a Grimclaw Bats and Nim Abomination and shook his head, "I don't know about these two cards-I don't really need more creatures."

Even without the red splash or the two black critters, Ben was hovering at twenty-five cards. He was trying to get that total reduced by one but was having a tough time deciding which part of his curve his last cut should come from. "The Clockwork Condor is definitely the worst card but I need to have something for fliers. I am going to play sixteen lands with my two Myr. I guess it should be one of my seven drops…"

With the removal of an Arcbound Lancer Ben sighed as he surveyed what was looking to be his final build. "This is not an exciting deck. If I can go 2-2-1 after my byes I will be lucky to make Day Two. I might manage a 3-2 with it but these cards are just not exciting."

Ben made a point of showing off one of his pet cards, the Slith Predator. "One of the main reasons I didn't run the splash is this little beater. He is a personal fave of mine. I want him to come down on turn two. I am happy if he trades with a Myr and I am happy if they have no turn two play." He also cited the green hungry Tangle Golem and the triple green Plated Slagwurm as reasons for sticking to two colors. 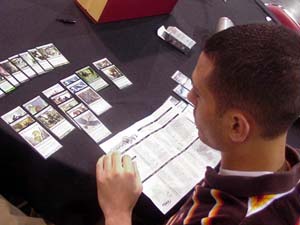 As he looked over his decklist one final time he contemplated the Eater of Days again and quickly put it back in his sideboard. "I wish it was less risky. I don't know what situation I might want to side it in. Even a deck with no artifact removal like blue-black could still have bounce."

Ben was planning on siding in his red artifact removal. "I am getting two mountains when I pick up my lands. I will take out one of my Myr and the Slith and something else for the removal and a Darksteel Ingot if they show me any potent artifacts."

"I am sure that will happen at least half the time!"