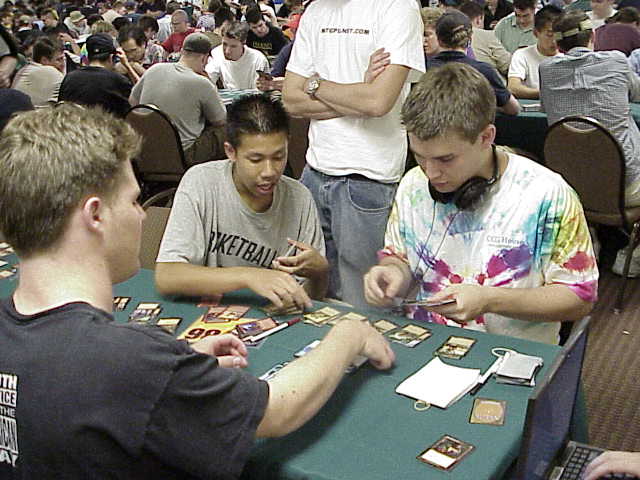 The talented team Bergerons needs no introduction. "Dragonmaster" Brian Kibler is beloved by 9-year old boys and 21-year old coeds alike. Ben Rubin, among many other accomplishments, is the only person to win two Masters Series tournaments. Ken Ho has been doing quite well lately, and in case you haven't heard, he won PT Osaka not too long ago. The team is undefeated so far today, and in good striking range for the second day.

Ben summed up the team's strategy for sealed deck: "We're going to play good cards that go well together, or something." After checking the decklist for inconsistencies, the team glanced through all the cards to get a first impression. They didn't like what they saw. After looking through the Odyssey and Torment, Ho said "I hope you're holding some gas there Ben," speaking of the Judgment cards. 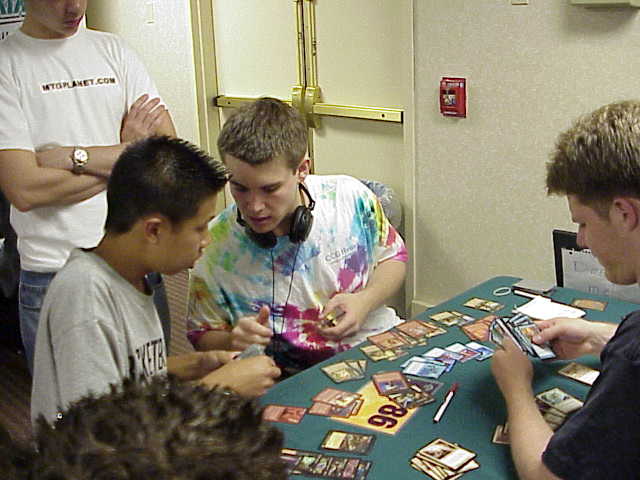 They then started sorting the cards into piles of usually play, maybe play, and unplayable. "We can build a really good green/red deck" said Kibler. "But do we want to?" replied Ken. With a little more discussion, they decided that they did indeed "have to" build green/red. Then talk turned which color would get "chopped," or used in more than one deck. Like many teams, the first inclination was towards splitting the blue, but Rubin thought the green was deep enough to be split, and that green/blue and black/white might work. Upon a closer look, the blue included a lot of bounce, which would go well with green/blue. Plus, the black included Caustic Tar, which would fit well in a black/white deck. So, they started by looking at what green cards could be moved to green/blue, which included all of the threshold green and some less efficient but still good creatures like Krosan Archer and Nullmage Advocate.

They fixed those decks up for a while, but Kibler didn't like the black/white deck and Ken didn't like the green/blue, so they decided to look at splitting the blue again. But, pretty quickly they realized that the blue/black deck didn't look that good, and the white/blue would be thin. So, they went back to the first build. The green/red deck looked like it might have given up too many cards to the green/blue, but most of the green cards in the blue/green deck seemed to fit better there, so it took a lot of thinking to figure out what needed to go back. In the end the Krosan Archer went into the green/red deck despite being not quite as aggressive as they'd like. The blue/green still needed to be cut a bit; in the end Standstill had to go, over the protestations of Ho, who no doubt was thinking of his PT Osaka winning deck. Attention finally turned to the black/white deck, which was an unconventional build with lots of options. A few quite good cards had to be cut because the Bergerons knew it wouldn't get to threshold easily. 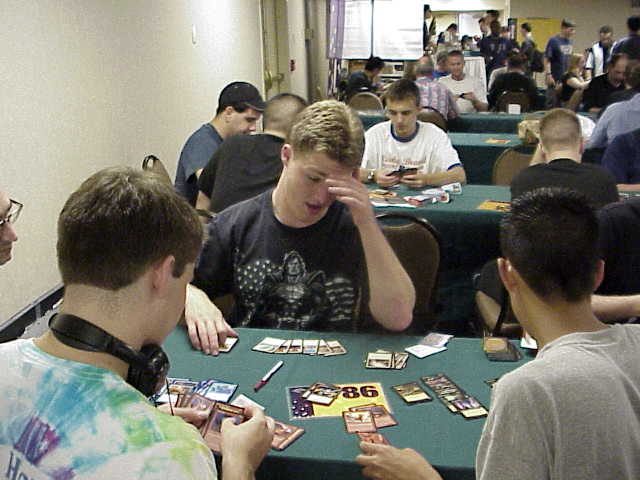 "This place reeks," said Kibler suddenly, and it was true. With that they moved into figuring out their sideboards and put a few finishing touches to the decks. Ben considered playing only sixteen land in the blue/green deck. Kibler made a switch to the red/green deck once he realized that he would be playing it rather than one of the others. The talk among the team was much more positive at this point than it had been at the start; Kibler explained that there were no true standout bombs, but the colors all had more depth than had first been apparent, and the decks had good synergy. The Bergerons seemed confident that they had made the best use of their cards, whereas another team would have gone with the standard red/green, blue/white and black/blue cards. They thought that the Caustic Tar and Unquestioned Authority made black/white, an unconventional choice, a lot more viable, and Auramancer would certainly shine in their deck. They predicted going 3-1 or 4-0; my prediction is that 4-0 will be tough without any real bombs, but Bergerons should have a very good chance to make the second day.