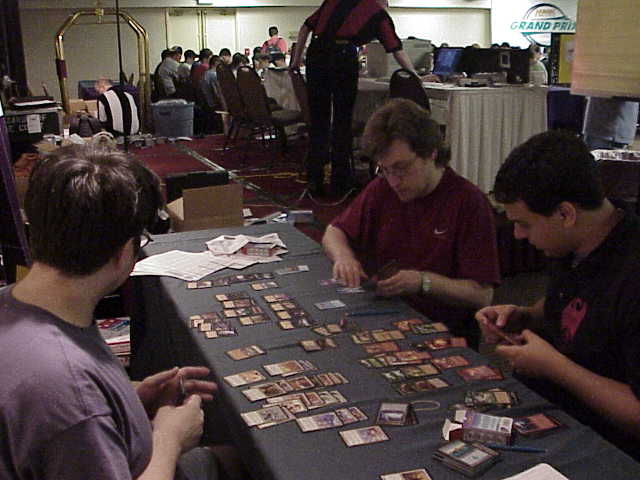 Head judge Rune Horvik went over and quickly corrected the mistake. Illuminati had clearly opened Werebears and not Mongrels, much to their chagrin.

JG: It would have been nice to have had Mongrels instead.
ZM: Red/green doesn't look good, and white has a ton of good two drops. Let's try red/white.
JG: Is red/white good?
ZM & AS: I have no experience with it.
ZM: Let's at least try it though.

Zvi took all the red cards and added them to the white ones. This left Alex with a pile of blue and green cards, and Justin with a deck of black ones.

ZM: That's thirty (cards)!
AM: Right now if I play seventeen lands, Crush of Wurms would not be unreasonable.
JG: Black only has eight creatures right now that I'd want to run, so let's try it with some of the blue. (Takes two Lost in Thought, Thought Eater, Aquamoeba, Aven Windreader, and Breakthrough from Alex's deck. He then cuts Malevolent Awakening). I want one of your bounce spells. I don't have many fliers either, so let me take the (Ghostly) Wings. AS: Do you really want Innocent Blood in that deck?
ZM: They'll just sac guys with Lost in Thought on them.
AS: Plus I don't like Last Rites.
ZM: I'm going to run sixteen lands.
AS: I'd play seventeen lands, you have a ton of four and five drops.
ZM: No I don't, I only have five, and I have nothing that needs mana to activate, except the Hypochondria. I wonder if I can pay one white mana? (laughs sarcastically)
AS: Six if you want to flashback the Firebolt, though.
JG: Do you want to run (Blazing) Salvo over Demoralize? Demoralize can do more damage potentially.
AS: I'd still run a seventeenth land over either!

Alex, Justin and Zvi switched seats at this point to look over one another's builds.

ZM: My card pool isn't great (looking at blue/green deck). Red and white are overstuffed.
AS: I don't like these decks at all. Let's try green/black and blue/white.
ZM: You can easily take away all my high end white cards like Zealot. I'll just add more burn to my deck instead.
JG: This may not work, but let's take a look at it.
AS: (After the switch) Actually, I like the way these decks look a lot better now.
JG: But who gets the Patchwork Gnomes?
ZM: You need this for threshold in the red/white deck.
JG: Rarrrrrrrrrr! (Grabs the Gnomes and windmills them onto the red/white deck). Innocent Blood is a lot better in the two Chatter deck.
AS: I was just eyeing that. I was eyeing the Malevolent Awakening also.
JG: Should I run Scorching Missile or Flaming Gambit?
ZM: The Missile, definitely. You have Anarchist to go with it.
JG: Good call. I don't know much about this archetype, but I remember what red/white looked like in Tempest and this looks a lot like that deck.
AS: You mean jank?
JG: I don't know, but it looks good!
ZM: Let's trade again.

This time Alex moves to the black/green deck, Zvi back to the red/white, and Justin to the white/blue. 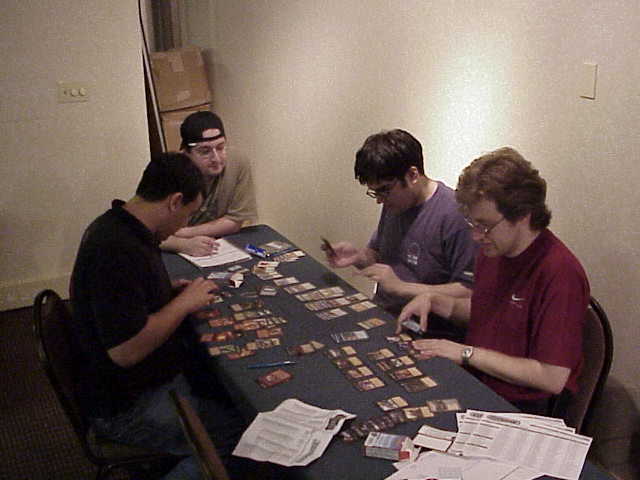 JG: Chamber is cute with the (Wormfang) Drake, but I'm not a big fan of it.
AS: My deck isn't taking advantage of the Werebears. None of my four drops are going to get cast on turn four.
JG: I want Auramancers.
AS: If you do, run Wings.
JG: Then what should I cut?
AS: Cut either Peek or Predict.
JG: Predict can go, but Peek is Peek!
ZM: I think I'd rather run burn to the head (instead of Demoralize). Eventually people will get total board control against me, unless I play stupid healer games, but I'd rather just rely on burn.
JG: So do you want to trade your Vigilant Sentry for my Militant Monk?
ZM: YES! (Swaps the two cards quickly) MUCH better!
JG: I like the Sentry a lot better in my deck. He's going to be amazing.
AS: Do you think Keep Watch would be better than Breakthrough?
ZM: No way! Breakthrough is threshold on a stick.
AS: These two decks are solid (black/green and white/blue), but that other deck isn't. But then again, it's not supposed to be solid.
JG: Your little guys are going to keep swinging, Alex. You're just going to keep getting through with them because of the Butchers and the Sudden Strengths.

Zvi asked his teammates about the rules interactions of damage prevention shields and Phantom Nomad. They were divided on how the Nomad's ability would interact with damage prevention from the Healer and Hypochondria, so they called over head judge Rune Horvik yet again.

ZM: So Rune, if you had a protection from red creature and an Earthquake, how is damage prevented?
Rune: The damage is reduced to zero.
ZM: Well, what about having two damage prevention shields around my Nomad?
Rune: If they were both up when the creature was damaged, then you would choose which takes effect.
JG: So if someone Firebolted my Nomad and I used Hypochondria on it, I could have the Hypochondria prevent the damage and then not remove a counter from the Nomad?
Rune: Correct.
ZM: Oooh, that makes my deck a lot better now! (Rune goes away to adjudicate other situations wisely). Do you think that you two (Alex and Justin) should switch decks for the metagame?
JG: We could switch if you'd like. I like to play the white/blue deck better, but I'm comfortable with the black/green.
ZM: You HAVE to switch after how nuts you went when you opened the Chatters and two drops! (cackles) 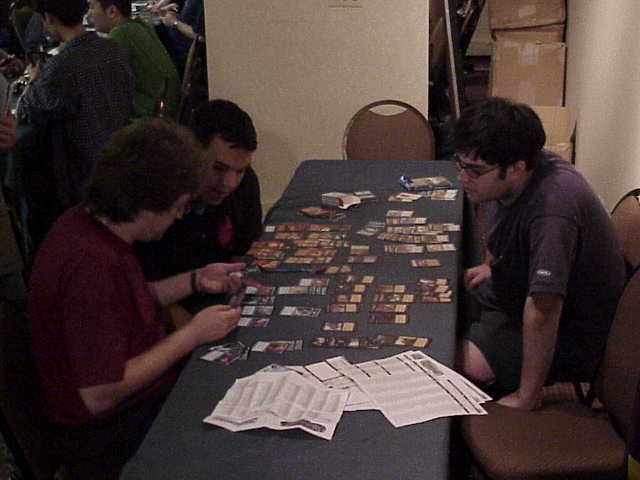 AS: Keep Watch beckons me!
JG: No! It's like an Inspiration that costs one less mana but makes you wait to draw the cards. Deep Analysis and Breakthrough are much better.
AS: Should I play the two sac lands (Seafloor Debris) to help get to threshold?
ZM: I've seen more people get screwed by those lately than helped by them.
JG: I like them.
ZM: But if you don't draw them in your opening hand they can really screw up your mana development. They are surprisingly bad.
AS: At least I only have one one-toughness guy in my deck. No losing to tims for me!
ZM: And I can shield up my Nomads.
JG: I'm happy with our deck choices. We got some goods cards.
ZM & AS: Our card pool was ok.
JG: I think I want to play sixteen lands though.
AS: Hell no!
ZM: Why not? He's got two Werebears.
JG: I'll choke on land with this deck at seventeen. I'm really tempted to run the Last Rites.
ZM: I think you'd rather run Leaf Dancer, if you have sixteen lands you won't have extra lands to pitch to Last Rites.
AS: Or you could add the Mossfire Egg, it's like running sixteen and a half lands.

The three players turned in their deck lists, at which point I asked Justin and Zvi about the land counts in the decks.

BB: I've noticed that Alex is very strict to making sure all decks have at least seventeen lands, no matter what.
JG: He's really too uptight about that. Sometimes you want to run sixteen lands.
ZM: In fact, I always look at a deck to see which lands I can get away with not running!
JG: Zvi is really good at figuring out mana in the decks.