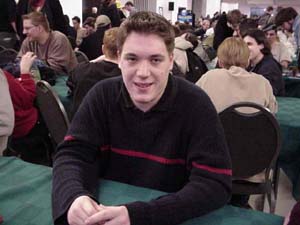 Kai BuddeHopefully by now nobody needs a formal introduction to multiple-Pro-Tour-champion Kai Budde of Hamburg, Germany.

Kai finished his fourth round with almost twenty minutes remaining, so I flagged him down to talk about his sealed deck. I had been hearing rumors all day about Kai's "broken deck" and I wanted a chance to see it for myself. At this point, Kai was 4-0.

Kai himself doesn't really feel that his deck is as amazing as people say. It's a solid green/black deck with a splash of red that benefited from a quirk in Torment print runs: the three cards Crippling Fatigue, Skywing Aven, and Faceless Butcher are very often in the same pack together. Kai got this fortunate print run not once, but twice.

In looking at Kai's deck, I can immediately see where he had the ability to play just his two main colors. He chose not to do so in order to splash higher-quality cards, but hit a conundrum when it came to which color to splash. In blue, Kai had two Skywing Aven and a Breakthrough, which are always nice additions to any deck. In red, he had a Firebolt, an Engulfing Flames, and a Chainflinger.

He eventually chose red for some additional removal, explaining that "good decks are usually black/blue and they should have no problem to deal with fliers [like Skywing Aven]. They have Looters and utility creatures that are vulnerable to removal [like Engulfing Flames]." Also, he added, "having four flashback removal is very nice."

Kai admitted that his mana curve was very bad, with most of his spells hovering around four mana to cast or higher. He explained that his deck redeemed itself by having five removal spells that are very cheap, and very powerful creatures at the five mana mark. Certainly it doesn't hurt to play creatures like Roar of the Wurm or Rabid Elephant.

A very good blue/black decks could beat his deck, Kai hedged, but he doesn't fear the aggressive red/green decks. He has too much removal and too much fat for that. A great card pool in the format "usually ends up black/blue because those colors have the best cards," explained Kai. And for a player who is setting their sights on the high tables, being able to beat those decks is key, and that's part of the reason Kai chose red over blue.

I was curious about his choice not to play the second Acorn Harvest, a card that I feel is very playable. Kai said that he would have, except he already had the two Crippling Fatigues in the deck and one Acorn Harvest, and didn't wish to play four cards that cost three life for the flashback cost.