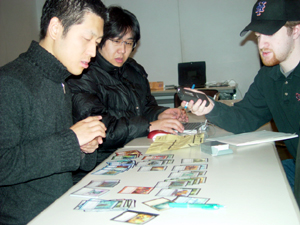 else did you think we'd cover at the start of the tournament? Masashiro Kuroda is three weeks removed from becoming the first Japanese Pro Tour Champion, and becoming $30,000 richer. For the immediate future, when it comes to Japanese Magic, he'll be the center of attention. It's not as if he came out of nowhere either, as he has long been considered one of Japan's best players. Kuroda had a tremendous amount of success in team events, winning a Masters and a Grand Prix with Masahiko Morita and Katsuhiro Mori as PS2. Now he's shining on his own, but then again holding a Pro Tour Championship trophy in front of the cameras has a tendency to make people take notice.

A funny aspect of this tournament is that despite being a Pro Tour Champion this season, Kuroda still only has two byes because they were set before Kobe. Japan's first and only Pro Tour winner is going to have to play six rounds today, while others will play only five.

Kuroda opened his deck, and to say it was full of bombs would be an understatement. Grab the Reigns, Molder Slug, Looming Hoverguard, Sword of Fire and Ice and Empyrial Plate were only the tip of the iceberg. Immediately, Kuroda set green as one of his colors, as the Slug was backed up by Copperhoof Vorrac and Fangren Hunter. Red was certainly going to be a splash, as Grab the Reigns and Electrostatic Bolt were a no-brainer. Aside from the Plate and Sword, Kuroda had plenty of other equipment to choose from, including two Banshee's Blades, Vulshok Morningstar and Leonin Bola. He cut the Banshee's Blades, citing that his other equipment was just better.

With the red and green out, Kuroda realized that he didn't have enough low casting cost creatures. He went to his white, which gave him Auriok Transfixer, Auriok Bladewarden, Skyhunter Patrol, Leonin Den-Guard and Loxodon Mystic. Aside from the cards having good synergy with Kuroda's powerful equipment, they also gave him some desperately needed early game action. But, at the same time, Kuroda lamented that "The blue is really hard to give up." Aside from Looming Hoverguard, it also featured Neurok Prodigy and Psychic Overload. Blue didn't have much depth, but the Hoverguard was enough to make Kuroda consider it by cutting the white and seeing how the blue looked instead. Black was immediately dismissed- even though it had Echoing Decay and Essence Drain, it didn't have much else and red was clearly the better splash color.

Even though the third color was still up in the air, the artifact choices were a bit easier to make. Kuroda cut Darksteel Pendant, saying that he had tried it at the pre-release, and it didn't work too well. He became intrigued with Panoptic Mirror, getting visibly excited about the potential with Grab the Reigns. He had other ways to abuse it such as Battlegrowth and Electrostatic Bolt. After counting his sorceries and instants, he sighed, "It would be fun" before putting it aside. Kuroda also noted that his artifact removal worried him, as he only had Molder Slug and Goblin Replica.

After some thought, Kuroda cut the blue and went back to the white. He wanted the cheaper creatures, and synergy with his equipment. Copperhoof Vorrac went to the sideboard as well, as Kuroda felt his mana curve was too top-heavy. In the interest of making the mana a bit more smooth, he also cut Battlegrowth for Darksteel Ingot, and mentioned that Mirrodin's Core would prove to be very helpful. After looking at the blue one more time, Kuroda finally settled on white. "The blue doesn't give me any early game, plus it has a lot of high casting cost creatures with low power." It seemed that Kuroda's strategy had come together, as he would last out his opponent until the bombs started dropping. "I want to do things on turns one, two and three so I can live long enough to let my high card quality do the rest." A glaring problem was the fact that Kuroda had a ton of artifacts and was playing Molder Slug, which he admitted was "bad synergy" but it's still hard to pass up the Slug.

Kuroda is happy overall with his deck, and predicted a 7-1 record today. He's got plenty of cards that can outright win games, although there are some card interactions that are a little clunky. His major holes are a lack of artifact destruction, and vulnerability in the early game. The first issue is a problem, because in a day of playing sealed deck you're bound to face someone with broken artifacts, and not having a way to deal with them could mean the difference between playing tomorrow and watching on the sidelines. Still, he's got plenty of great threats to make that less of a concern. The early game stability issue is relevant, but sealed deck tends to be slower. His decision to play white will also make this less of an issue. In the big picture, Kuroda's cards will likely be better than his opponents'. Considering that he's a great player and a Pro Tour Champion coming into this event with all the momentum you could hope for, it shouldn't be a surprise seeing him near the top of the standings at the end of the day. Having a few unfair cards doesn't hurt either.