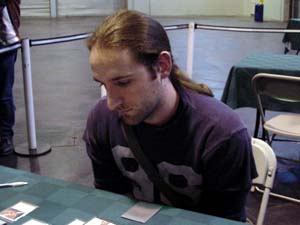 "the Brit" Gomersall has become a well-known and well-travelled face on the Grand Prix circuit. As well as travelling to most of the European events Sam also crosses the Atlantic and turns up to the US GP's as well. Recently he's just completed a whirlwind tour of Asia, starting with PT Kobe and culminating in a 17th place finish at GP Sendai last weekend.

The hard work and experience has paid off as Sam is currently on the train and quietly picking up Pro Points with a succession of solid, if unspectacular finishes. A breakout top 8 finish was finally achieved at GP Göteborg last year after man close calls. A title on home soil would be just the thing he needs to really propel himself forward.

His card pool proved a very interesting one. The first thing he noticed was a bunch of Myrs, which are always good to see, but a quick flick through the cards threw nothing much exciting out apart from a Grab the Reins. When he started to lay the cards out in colours there were some simple choices. Green wasn't much more than a couple of Tel-Jihad Wolves and so that was quickly dismissed. Black looked okay but cards like Slith Bloodletter and Consume Spirit required a heavy commitment that wasn't justified by the remainder of the cards. That was also dismissed with the exception of a splashable Terror.

Of the remainder of the colours white looked the juiciest with some nice quick creatures and a couple of Arrest (1 foil). With Den Guard, Glaivemaster and the scary Loxodon Punisher Sam went straight for the equipment to see how to best abuse it. No Bonesplitter but a Vulshok Morningstar looked tasty. Vulshok Gauntlets also looked to have good synergy with the Den Guard and Razor Golem. Banshee's Blade and Fireshrieker both made their way into the deck.

Then Sam was left with an interesting dilemma. Red presented some powerful spells in Electrostatic Bolt, Grab the Reins, Barbed Lightning and Unforge. Unfortunately the creatures were a rather mediocre Ogre Leadfoot and Vulshok Berserker.

On the other hand blue had some tasty fliers in a Chromscale Drake and Spire Golem, and some fat in the form of a Quicksilver Behemoth. It also had a powerful answer to equipment in the form of Carry Away. Gomersall had a Talisman of Dominance and a Silver Myr to support blue, but he knew he'd also need to run the Darksteel Ingot.

It was a choice of power over consistency. Gomersall tried taking out the white, but that left him with too few creatures. In the end he decided trying to slot the blue in would bend the deck too much out of shape and stuck with the more reliable white-red.