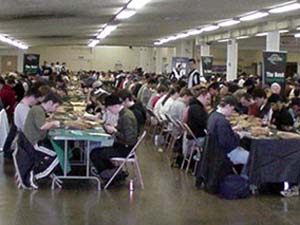 As anyone who has ever played Sealed Deck well knows, shuffling your deck is one of the most vital processes a player faces every round. A quick walk around the play area saw players groaning as they laid down their third swamp and gripping a pair of Tangle Golems or mulliganing when their initial seven featured the only two Mountains in their deck and none of their red spells.

Are those draws the result of true randomization or poor randomization? It is impossible to tell but if you watched these players shuffle ferociously for the next game you could tell what they thought was to blame. For most players shuffling is a cocktail of mathematics and superstition and we talked to some of the players in attendance what pregame rituals they went through to achieve true randomization.

Mike Pustilnik: "I do a bunch of piles--maybe seven or eight times doing them in an irregular fashion." Mike does not lay the cards down in sequence across the piles rather he lays them down in a helter-skelter pattern. "I usually do between five and eight piles and then I do at least twenty side shuffles as opposed to riffles. After that it should be completely randomized.

Ben Rubin: "I riffle and I pile. I am not superstitious if that's what you mean. I can tell you I am very good at riffling. I'm pretty good at piling also but if you ever want to see a great riffle shuffle just watch me."

Rob Dougherty: "The first thing I do if my deck has just been constructed is riffle-or bridge--a bunch of times. Then I lay me deck out in seven piles. Basically I want a number that is not divisible by the number of cards in my deck. Then I pick up the piles from opposite corners and shuffle them together. I repeat that until the number of piles is reduced down to two and then I shuffle those two together. Then I riffle that a few more times. That is my glorious shuffling method. Patent pending."

Brian Kibler: "I don't really have any particular method of shuffling. I don't bother with sleeves for my Limited decks anymore because I mostly riffle my decks and it is harder to riffle in sleeves. I do pile my deck out before each game but that is just to make sure I have the correct number of cards."

Ken Krouner: "I used to rely on pile shuffling but it wasn't helping my mana draws so I had been riffling until recently because that is supposed to be more random. I am back to piling again though. Mostly cause that is what everyone else has been doing and I am a follower. In limited I do piles of seven and then piles of six. In Constructed I do piles of seven and then piles of eight. The reason for the difference is that I don't want to make a number of piles that is divisible into the number of cards in my deck."

Eric "EDT" Taylor: "I riffle between eight and twenty times. That's it. If you stack your mana and insufficiently shuffle you deck it is cheating and if you pile your deck the deck the wrong number of times you can also end up with a non-random deck--not necessarily on purpose. I just want to riffle enough times to make sure I am not cheating."

Nat Heiss: "I don't pile very much because I am lazy. And I don't think it helps me any. I just riffle and cut my deck until it feels random. I rely very much on how my deck feels. If I seem to be getting a bunch of bad draws I might pile some. I am always happy when my opponent shuffles my deck--they are doing some of my work for me. I also want them to keep track of my life for me but the judges frown on that. I don't really shuffle them too much though. Again…lazy."

Mike Turian: "My plan is to shuffle longer than my opponent. I really enjoy shuffling. It is the only time you get to talk to your opponent. Once you start playing the conversation is like, 'Done…kill that…done.' When you are shuffling you can have a conversation. You know, 'Where are you from? What rares did you open?' That kind of thing."

"Actually, I try to intimidate my opponent by shuffling so much. I pile and I riffle and then I do some side shuffles. I love shuffling even after my opponent has finished their shuffling and put their deck in front of me. I love knowing that I am not even halfway done with my shuffling and that I will have the more randomized deck. When my opponent finally breaks down and picks up their deck to shuffle a little more that is when I know that I am done."

Mike Guptil is the tournament organizer for the Grand Prix and a Level 4 judge. He is a veteran of countless deck checks and we asked him to share with us what he looks for when he examines a deck to ensure that it has been randomized. "We look for patterns for sure. Two spells, land, two spells, land , etc. We also keep an eye for all of the deck's bombs being bubbled up near the top of the deck. Also we look for a good mix of land near the top of the deck and then the rest of the land clumped at the bottom. Those are the big three but the pattern--or mana weaving is the number one on the list of things we look for."

Mike recommends a method of shuffling similar to what Rob Dougherty described--riffles, piles and then shuffling the piles together. He also shared a couple of other issues that arise during shuffling that are not related to randomization. "People looking at their decks and/or their opponent's decks while shuffling is a big problem. Deck orientation is a big issue. A lot of the players at a Grand Prix do not have much tournament experience and they might not be aware of how to shuffle your deck so that the contents are shielded from view."

Mike also had some advice for novice tournament players regarding using sleeves. "If there is one piece of advice I could give to players it would be to shuffle your cards AND your sleeves before you sleeve your deck. Even a brand new pack of sleeves can have some pattern of irregularity. If you sleeve your unshuffled deck into your unshuffled sleeves you will end up with an unintentionally marked deck. If you get deck checked you can get disqualified for that."