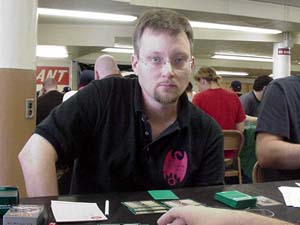 After I built this deck I thought to myself, 'I am either a genius or an idiot'", laughed Rob Dougherty as he laid out the deck he would playing in this weekend's tournament. Rob is one of the most well known players in the world and is the founder of Your Move Games. Since his Top 8 performance at Pro Tour Houston , Rob's increasingly busy life has impacted the amount of time he could dedicate to the game. A marriage, multiple successful business ventures, and two births can do that to a man.

Rob was not qualified for Kobe and is similarly uninvited to San Diego--currently. He came here with an eye toward getting back on the Tour. He rolled those eyes upward when he opened the pool of cards he would have to work with this weekend.

"I opened up and did my standard check of the contents. The first thing I noticed was the equipment--two Bolas, Bonesplitter, and a Morningstar. The black also jumped out at me with Consume Spirit, Echoing Decay, Essence Drain, and Riever Demon. But the Red was very disappointing with only a single Electrostatic Bolt and no pure artifact removal. In fact, the only artifact removal I had at all was a Deconstruct."

The lack of artifact removal was a significant concern for Rob. It did not have to be pure artifact removal either. He would have been happy with a Turn to Dust or an Unforge. "At an event this size you find the undefeated decks by round five or six have all this broken equipment like Swords, Warhammers, and Skullclamps. Those cards are so powerful that they can propel a mid-level player to a 6-0 record by themselves. Being able to deal with equipment is essential at an event like this."

Rob quickly realized that his pool of cards was generally weak. "I wanted to figure out the best build that would let me deal with the decks I anticipate the top tables--ones with not just a bomb but multiples. I looked at mono-black as my first option. Because of the lack of true bombs in my deck I wanted to allow my mana to accentuate the good cards I did have."

Even at eight mana it is hard to muster the four black in the casting cost of Riever Demon and his Consume Spirit would have been close to being a Fireball. "I had a good artifact creature base and I knew a mono colored deck was possible. The removal made me lean toward mono-black but I noticed that I also had very good white creatures."

With all the god equipment in his deck, Auriok Glavemaster and Leonin Skyhunter could exert a lot of early pressure on an opponent. He also saw a lot of deck synergy in playing white. "I discovered that if I went with a mono-white deck it would become a creature horde that would make my two Leonin Bolas that much better."

Rob still had the option of splashing any number of good cards form the Electrostatic Bolt and Deconstruct to Essence Drain and Echoing Decay but chose not to. "I went mono-white to accentuate a couple of cards. Leonin Skyhunter and Razor Golem become much better when you can assure they come out an turns two and three if you draw them."

"Plus, because it is a creature horde deck I wanted to keep my mana count as low as possible which I would not want to do in a two color deck. I was able to play just fifteen lands with no Mir or Talismans. It also let me squeeze in a few extra spells…"

Rob let that last sentence trail off with a chuckle as he presented the extra spells--a Surestrike Trident and a Nemesis Mask. "These cards are on a lot of people's janky radar but they are strangely effective in this build. The big problem with this type of deck is having a lack of finishers and a lack of removal. These cover both of those bases."

Obviously if you are going to be playing so much equipment you want to have enough creatures to pick it up. Rob was playing with sixteen creatures and a Raise the Alarm. "That is quite a lot for me! I usually play only ten or twelve. Nemesis Mask can be amazing on a quick Den-Guard or Razor Golem. It also serves as a late game finisher."

"The key to this deck is double Bola. I will have creatures down before my opponent and being able to tap down their creatures to finish them off is great. Plus, it gives me a way to deal with equipped creatures--amazing in my zero artifact-removal deck."

Rob commented on a few of the other cards in and out of his deck. "Arcbound Reclaimer--which is generally god--is great in my deck. I rely so much on equipment. This Talisman in my board is kind of surprising. I always play them but I want to cast creatures. The last thing my deck wants to draw is mana."

Despite not being qualified for the Pro Tour Rob still had three byes for this event. He'll find out for sure once the fourth round rolls around. He spent some time testing his deck against other three-bye players and the early results were very encouraging. Check back later today and we'll find out how he did and if he would have done things any differently.

1 Raise the Alarm 1 Roar of the Kha