Aside from Affinity, there are two other major archetypes that most of the pro players have opted to run. The first archetype is Tooth and Nail, which we will cover tomorrow, but the second one is one that many pros have derided as being almost unplayable, yet is still seeing considerable play.

Big Red (or Anan Go, as the Japanese called it) won the Block Pro Tour for this format, but that was a whole set ago, before Scry, before Eternal Witness, and before Cranial Plating. Most pros I talked to before the event were tempted by the turn 2 Slith Firewalker start, but thought that the deck was either too inconsistent to play, or were frustrated that it ran out of gas too frequently. However a few players have bucked that conventional wisdom and are currently sitting near the top of the standings. 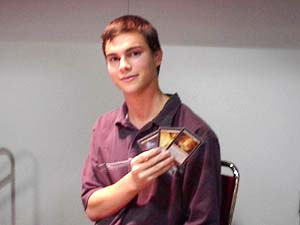 Charlie Gindy is another one of those faces you've probably seen before, but may not remember where. This Florida native was part of the Grand Prix: D.C. winning team and finished second with his team at GP: Pittsburgh. He has also started to become a more consistent face on the Pro Tour and finished second in the his last two PTQs in this format, so he has had a lot of experience with the full Mirrodin Block. This is what Charlie had to say about his deck choice:

"I think this deck is an awesome choice. It's very good against all the Green decks. I'm running maindeck Furnace Whelp because they can't block it, and they can't kill it. Against U/G they either waste a counter on the thing, meaning they can't counter your Pulses or Arc-Sloggers, or maybe they buy themselves a turn with an Echoing Truth.

"The matchup against Affinity isn't great, but I have a bunch of artifact removal spells in the board. You just board out the spells that cost five, bring in the removal and all of a sudden, your deck is full of cheap spells that kill their guys and their mana,

"I just got my second loss today (I only had one Bye), but my only two losses were both to the to the mirror. The last round I got out Arc-Sloggered - what a beating! I played Affinity in both of the PTQs where I made the finals, but I chose mono-Red because it's a better matchup against Tooth and Nail, and I knew that the field would have a lot of Tooth in it today." 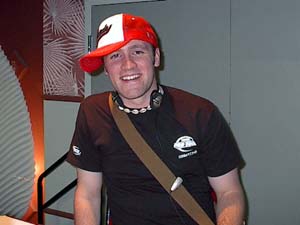 Jeremy is one of the many very good Team TOGIT players that you don't necessarily hear about. Last night in the hotel room, he almost convinced many of his teammates to run the Red deck, but in the end they left him to pilot the red spells all alone.

"The deck I'm playing is what we called 'Little Red.' It has almost a 100% matchup against Tooth and Nail, is very good against U/G, and is pretty good against the Big Red decks too. Unfortunately, it's not very good against Karsten Affinity, which a lot of the better players have opted to play this weekend. I played this deck to two PTQ top 4s last weekend, but lost in the semifinals of both tournament to Affinity decks.

"This deck is a little different because the mana base is pure Mountains. I wanted to go for consistency and make sure I didn't get wrecked by random Oxidizes that weren't meant for me. Running only red sources allows you to play Flamebreak and Furnace Whelp without any issues. I'm also playing Chrome Mox instead of Talisman, which lets you cast turn 1 Slith and get more aggressive draws.

"So far the metagame has been good to me. My only loss was to Huey playing Affinity. Many of the better players are playing Karsten Affinity though, so this may end up being a good Day 1 deck, but might be pretty bad for Day 2."