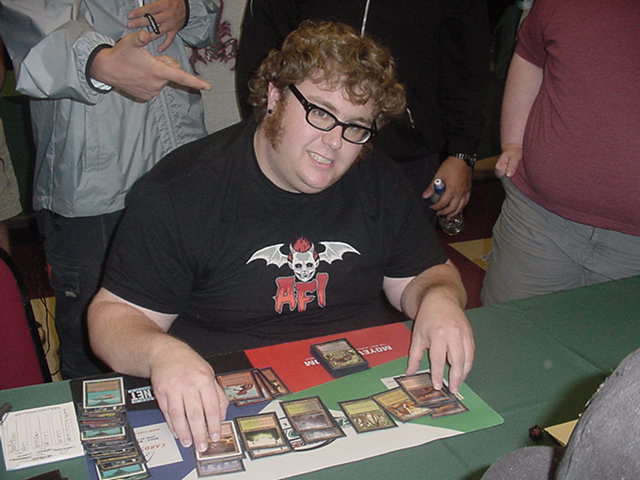 David Petersen strode into this tournament with no byes, and after 12 rounds he is 11-1. His weapon of choice? A four-color Braids deck designed by Nick Little of Indianpolis.

"I'm a 5-Color player from Chicago," said Petersen, "and I met Nick when I was working in Indianapolis. He made Top 8 at Midwest Regionals with the deck this year. It's amazing."

Petersen did tune his version to be a little more "eccentric." "I took out the Ravenous Rats," he said, referring to Little's original decklist, "and I put in two Grim Lavamancers, a Spiritmonger, and a Mystic Enforcer." After twelve rounds, did he still believe that random one-of's of giant monsters was a good idea? "Oh, absolutely, I love them. The Enforcer won me a match in round 2. I've never actually drawn the Spiritmonger, though."

So how does a deck sporting the double-black Braids and the triple-red Violent Eruption, along with tons of green spells and an Enforcer, balance its mana? "The mana base is twelve painlands, six filterlands, four Cities [of Brass] and two Forests. I've only had to mulligan once, and it was in the last game of the day on Day 1. I've never really gotten mana screwed."

Two two dominant decks in this tournament have been Psychatog and Goblin Trenches, but Petersen's deck has game against those. "Psychatog can't handle all the damage. The little stuff (Call of the Herd, Elves, Lavamancers) plus Braids is too much for them. And after sideboarding it gets worse - I have Pernicious Deeds and Terminates. Trenches is rough game one, but Deeds in the board really help out." Petersens's one loss is to a Psychatog deck, but that is balanced against five wins versus that archetype. And I just saw him beat Trenches in a nailbiter, so the deck certainly is as good as advertised. "The only bad matchup I had was against [Gary] Krakower's discard deck. But I still won."

Petersen is now in good position to make Top 8 and get back to the Pro Tour again. He's been there a few times, as far back as PT Dallas in 1996, but he never put up a high finish. With his awesome run here, the high finish is all but a cinch.