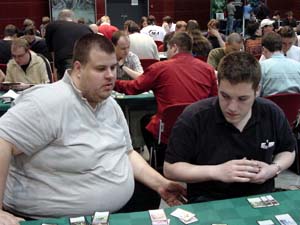 the Phoenix Foundation are 4-0. For the second sealed deck I went over to see what card pool they'd get to play with for the second half of day one. As I got to the table most of the major decisions appeared to be made. Green was virtually nonexistent while blue and white could almost stand on their own. As black had both Reiver Demon and Consume Spirit then that couldn't really be split leaving the red.

Blue leant itself straight to affinity with a Hoverguard and two Quicksilver Behemoth. In went all the cheap artefacts and that deck was set. The only really playable green cards were a Tel-Jihad Archers, Viridian Shaman and Predator's Strike, which all went into the blue deck.

Baberowski laid out the white cards featuring some nice goodies such as a pair of Skyhunters and pair of Razor Golems. The card pool also had some nice solid equipment and the white deck picked up a Bonesplitter and two Vulshok Morningstar. With such an arsenal it was fairly obvious where ol' Spikey should find a home as part of a red splash.

The remaining deck took the majority of the black cards and the rest of the red. It looked slow but very powerful. Alongside the Reiver Demon was an Altar of Shadows and Triskelion. While Blume laid out the possible artefacts that could go in the deck Budde spotted a Frogmite and Enforcer and hastily appropriated it for the affinity deck.

Shatter was passed back and forth between Blume and Baberowski before Baberowski finally took it. He also gave a home to a Stalking Stones.

The remaining changes were cosmetic. Budde swapped one of his Longbow for a Spectre's Shroud with Baberowski. An Arcbound Slith went from Budde to Blume.
After counting his artefacts Blume decided he couldn't run Nim Shrieker and replaced it with a Needlebug. 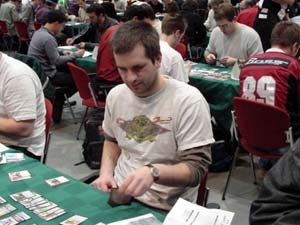 I asked them what they thought of their cards and they said they were okay, not spectacular, but probably good enough to give them the two wins they need to advance to tomorrow. I asked what had been the interesting choices but with the green so weak there hadn't been many decisions to make - the decks pretty much built themselves.

1 Burden of Greed 1 Hunger of the Nim

1 Wail of the Nim 1 Barbed Lightning