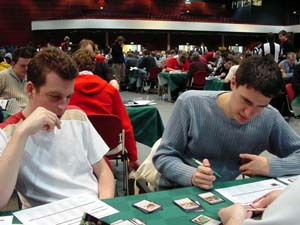 weekend started with me finding my way to sit down with team Von Dutch. Jeroen Remie, Jelger Wiegersma and Kamiel Cornelissen decided to team up when the various Dutch teams they were in stopped playing together. The most memorable team who hadn't survived the split-ups in Holland was Jelgers former team: team Starmaker.com/lap aka team Lowlands: Sideboard Online reporter Victor v/d Broek, Jelger and Frank Karsten were considered the # 2 team in the World, but failed to finish on top on some occasions.

Jelger, Jeroen and Kamiel had 2 byes because of the massive amount of Pro Tour points they share, almost breaking 100. Might as well be over 100, because Kamiel doesn't exactly know how many he's gathered so far. Last thing Sideboard found out about Von Dutch: Little Darwin (Paul Reitzl) donated them their name, so we know almost everything about them we had to know…

Von Dutch was pleased with their card pool. Cards worth mentioning in their deck were Loxodon Warhammer, Arc Slogger, Wand of the Elements, 2 Spikeshot Goblins and 3 Irradiates. Further examination of their product gave us the following worth mentioning:

After they successfully divided their card pool in playables and crap, every color got the same treatment: cards were divided in creature/non creature piles and were laid out according to casting cost of the spells. Three colors were identified as the main colors (red, green and blue) and some sort of discussion started about which colors should be added to the main colors. Obviously white wanted to mix with red: both red and white were packed with removal spells or creatures that could do the same (Arc Slogger, Spikeshot Goblin). Also, Leonin Battlemage combined best with the instants of red and white (2 Electrostatic Bolts, Test of Faith).

Less obvious was the decision to divide the black card pool: some sort of affinity hybrid was made from the blue cards and the 3 Irradiates found their new home there. Pewter Golem also combined well with the 2 Vedalken Engineers, but the 2 Chittering Rats went to the green deck along with some other black cards. Nim Shrieker was obviously put in the Affinity deck and was made stronger with 2 Vault of Whispers.

The green deck was actually pretty good thanks to 2 Tangle Golems, double Chittering Rats and everyone's favorite kiddy combo: Ageless Entity with Loxodon Warhammer. Yeah. Oxidize and Deconstruct got some help in the removal department from Echoing Decay.

When asked about their decks, everyone agreed that they had a strong card pool and were able to build 2 fairly good decks (blue/black and green/black) and 1 amazing deck (the red/white). Of course, there were some debates going on about specific cards and those were actually pretty good: Jeroen begged Jelger and Kamiel for permission to cut the Vulshok Gauntlets from the red/white deck for a second Altars Light, but he didn't get it. He whined on a bit about it, but it was purely for fun, because he respected Kamiel's and Jelger's Judgment.

Also, a Stalking Stones was tried in all three of the decks, but due to the land-Affinity Golems in both the green/black and the blue/black and the fact the green/black deck had a surplus of double casting cost spells in both colors, Stalking Stones was not successful in finding a maindeck position at first. Debate about it went on during the last minutes of deck construction, and finally the Stones found a place in Jelger's deck.

Myr Incubator also got his share of debate, but with more than 15 artifacts in the blue/black deck, he got his chance, but only because of the Vedalken Engineers. 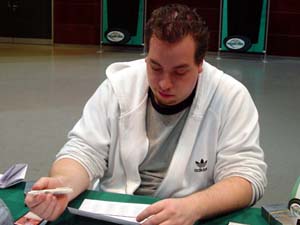 When the dust of deckbuilding settled, Jeroen got the best deck and mentioned that you should always give the bad player the good deck. In this situation, the red/white deck was given to Jeroen, but in teams like this it's hard to point out the weaker player, so our guess would be Jeroen was kidding a little…

Kamiel got the black/blue deck and Jelger would play the green/black.

With this first sealed deck of the day only 2 rounds would be played, since Von Dutch had 2 byes. All team members were confident about a 4-0 with this cardpool.

1 Soul Nova 1 Confusion in the Ranks