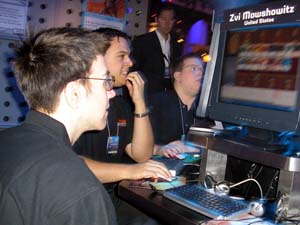 Zvi Mowshowitz (now half the man he used to be… literally) sat down this morning for an Eighth Edition Rochester draft tied for second place at 4-2. The table:

The prevailing opinion going in was that green was where the action is in this format. That bit of information proved crucial as the draft played out.

In the next pack, Lava Hounds slipped past Finkel, Herzog misclicked on , and the Hounds came to Zvi, which he snapped up happily. Wall of Air came to Zvi third, and when he cracked open Two-Headed Dragon, the whole kiosk erupted in cries of "Whatever!"

What was entertaining about this draft was that the players were seated at a kiosk with eight computers in a circle. Because the draft was Rochester as opposed to booster, each player's picks were visible to the other seven, and because the draft was unsanctioned there was plenty of smack-talk going on.

Most of it revolved around the color green. Justin Gary, in the 8 seat, wasn't about to let Jens's Spider pick keep him from going green. He knew that 8 was the boss of 1, and took a green card of his own. Gary Wise, very aware the seat 7 is the boss of seat 8, also took a green card amidst loud protesting from Justin. That made three green drafters in a row, and one more--Dirk--two seats upstream from Gary. And Dirk was certainly not backing off, as he was the beneficiary of a first-pick Thorn Elemental.

As the draft progressed, Jens tried to find other colors to draft. Black seemed fine. Justin was in red, as was Finkel, and Finkel was also clearly white. Blue was too thin with Zvi and later Gary Wise snapping up the good cards, leaving Jens without many options. He took black cards primarily from then out, but kept dipping into white and green whenever a good card presented itself.

Finkel should have been in good shape drafting red-white behind the sea of green, but he had to go and complicate things for himself by screwing around with Nicolai for no real reason. At one point early on, Finkel counter drafted a Looming Shade that could have slipped to Herzog. Herzog threw his hands up in dispair, after which Finkel stoop up from his chair, made a lewd gesture, and said, "I'm 1-5, Nico, you can fight all you want!"

As Finkel's deck came together, he began showing signs of regret and was worried that Herzog was going to exact revenge on him at the worst possible moment. One such moment presented itself when Zvi opened a pack containing Wrath of God going the other way. "I've already played Nicolai and Jon," Zvi said, "so I'm not taking it." Finkel sat with his hands clasped in faux prayer as Nicolai contemplated his pick, then let out a sigh as the Norwegian took a black card. "You should have hated it," taunted Finkel as he snapped up the sorcery. And it didn't stop there; Finkel's sideboard ended up containing a Primeval Shambler and a Serpent Warrior, both of which Herzog would have played. After hating one of those cards, Finkel said, "I don't even know why I'm doing this. I have no reason to mess with him… I guess it's just fun."

Herzog also dipped into green--drafter #5--when Canopy Spider and Craw Wurm fell into his lap. Green may be the best color in the format, but five people seems like way too many.

Back to Zvi. As you can see, there was a lot of nonsense and fighting going on at the table, and Zvi did well to avoid all of it. He knew exactly what his deck wanted: aggressive 2-drops, defensive 3-drops, fliers, and whatever burn presented itself. Although his draft was not as entertaining or exciting as others at the table, it was far better than any of them as well.

I expect Zvi to go 3-0 with this deck, no problem.