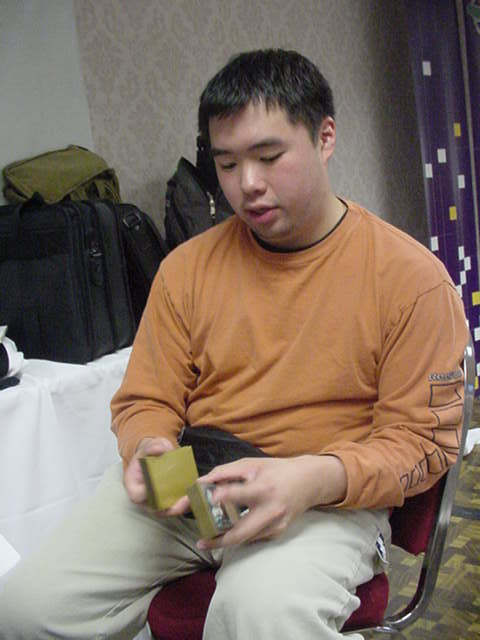 Long time pro player from Canada Gab Tsang showed up at GP Milwaukee with an exciting new deck called Zombies Online! On the surface it appears to be a typical BUG deck, but after further inspection you notice that it doesn't run cards typical of that deck such as Pernicious Deed and Spiritmonger. Instead, Zombies Online takes massive advantage of the madness mechanic from Torment. I sat down to discuss his deck build with him between rounds nine and ten.

Ben: How'd you do this past round?

Gab: I lost, but I was really mana screwed. I just couldn't draw enough lands, but it's going to happen sometime during the tournament so oh well.

B: Where'd you come up with the deck idea?

G: I'm playing Magic Online a lot these days, and I saw someone running a similar deck in a premier tournament. He had the usual Green/Blue but was running Black for Zombie Infestation, and it seemed really good to me. So I took the specs of the deck, and changed it around a bit. I kept testing it, and I assumed there would be a lot of Psychatog, Trenches and Green/Blue, so I metagamed against those decks.

B: What cards did you change for that?

G: I took out all the Red/Green hate, like Roar (of the Wurm) and Call of the Herd. I mean, Call of the Herd is really good regardless, but it's not amazing in those matches. I put in Duress to combat the control decks, and played more black and pain lands. I have 10 damage lands now, but against the control decks damage doesn't usually matter-they either will kill you all at once or they won't kill you.

B: How does the deck play?

G: It's a pretty typical Blue/Green tempo deck, but it adds Infestation. If I drop a turn two Infestation, I can start dropping turn 3 Arrogant Wurm and Circular Logic, and add zombies on top of that.

B: And what are your best and worst matchups?

B: It's you and PTR (Peter Szigeti) in day two now with the deck?

B: Tell me about the sideboard.

B: Yeah, the Gainsays, Disrupts and Spellbane Centaurs are really good against blue in general, and they Slays are decent against green decks. What are the Unnatural Selections for?

G: I bring them in for the mirror match, you know, to kill other Mongrels, Wurms, and things like that. And Merfolk Looters. My deck has a really hard time killing a Looter.

B: So you try to put a lot of legends in play.

4 Duress 2 Roar of the Wurm 1 Upheaval