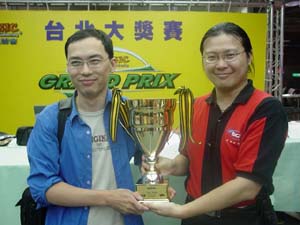 It almost never happens that the most creative deck at the tournament walks away with the whole thing. More often than not, creativity is just deviation from what countless hours of playtesting and endless tournaments have shown to be the best cards within given decktypes. At the start of Grand Prix - Taipei, it seemed like Sheng Hsun Hsia was just another deckbuilder out to demonstrate his difference. He had no byes, and a deck that had so much Judgment in it that it just couldn't be good.

Thirteen rounds later he'd proven his point, taking first place. And at first glance it's hard to understand why.

For the most part, Hsia's deck looks like traditional blue-white control. He has an impressive array of countermagic, sixteen options between Counterspell, Absorb, Memory Lapse, Exclude and Mystic Snake. He has a flying finisher in the form of Mystic Enforcer. He's playing with Wrath of God.

He plays the early game in that fashion, fighting for his life total, Lapsing and countering early to keep his opponent from getting his foot in the door. That, in turn, lets him play Fact or Fiction on turn four instead of Wrath of God. Repulse and Exclude let him get even further into his deck at the same time. He has Deep Analysis, too. All that card drawing means his two- and three-of's get more play than you would expect. He'll throw down Wrath to save himself, sure, but he'd rather be digging.

Which leads us to the heart of his deck: The Living Wish and the Hunting Grounds. Hsia always seems to be at threshold, so the Grounds is always on. The first thing that does is let him cast his Mystic Snakes for free. The second is that when he casts Living Wish and fetches Phantom Nishoba, he doesn't have to pay to get it into play. The 7/7 trampling, Spirit-Linked beast starts hitting and doesn't stop until the enemy is dead. The Wish also gives him tutoring power from his sideboard. Mystic Snake to counter. Aven Cloudchaser to handle Opposition or Squirrel Nest. Nantuko Tracer to handle Genesis and Glory, or even a Roar of the Wurm. Thornscape Battlemage for Ensnaring Bridge.

Genesis gives Hsia long term staying power. It lets him ignore his Enforcer in the early game, and provides a brutal lock by recursing Mystic Snakes. The Nantuko Monastaries function just as well as Treetop Villages used to.

Since he needs the space in his sideboard for the Wishes, only the Seedtimes, Meddling Mages, Tangles and Circles of Protection get to come off the bench. The Tangles not only give him more ways to stall out the early game, but on more than one occasion this weekend let him win close races off his shrinking Nishoba against an increasing army of weenies. The Mages are presumably to decide games quickly by locking out key cards, but more often than not they just drew out removal, and so they may not be optimal. The Seedtimes help to give blue mages fits, augmenting his potent arsenal of countermagic.

As the environment evolves we'll know better if Hsia's deck is here to stay. It might have been the youth of the environment that let Hsia take over. It might have been the element of surprise his deck afforded him, letting him take advantage of unsuspecting opponents. Whatever the reason, for today at least, Hsia's crazy creation stands above them all.