Deck Tech: The Many Flavors of Affinity

Most of the Pros agree that in spite of all the hate out there, Affinity remains the best deck in the environment, and they are proving it by putting their money where their mouth is. Figuring out what the best version of Affinity to play, on the other hand, is a much tougher task. We sat down with a few of the pros running the deck this weekend to find out why it's considered the best deck, and how they went about choosing which specific version to run. 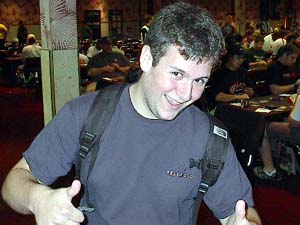 Matt Boccio won a Neutral Ground PTQ last weekend with Frank Karsten's Vial Affinity deck, with his only loss on the day coming to mono-Red. He added three Somber Hoverguards to the main, taking out 2 Myr Enforcers and a Cranial Plating because he didn't find Myr Enforcer that exciting at the PTQ, while Hoverguard seems really good against the Green decks since they have no real way to deal with it. He also dropped a Myr Retriever for a second Atog for the Red matchup, saying "Almost every time you cast Atog, it is game over for the Red decks, and I was having more trouble with that matchup that when I was playing Green." He also added a Glimmervoid and took out a Blinkmoth Nexus to make it easier to cast the extra colored spells. In the sideboard he packs an extra Glimmervoid plus three Shatters and three Shrapnel Blasts.

"I think Mantle Affinity is a little too slow. Some of my friends played it at some of the earlier PTQs, and they were always a turn behind. The reason why Affinity can beat any deck is because it's just too fast, and the Mantle version seems to give your opponent that one extra turn to recover, so you lose more." 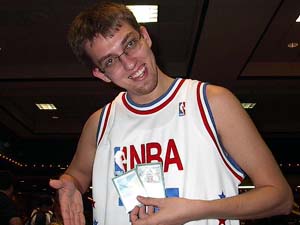 Pro Tour: San Diego top 8 competitor Marc Herberholz apparently kicked off a trend last night while testing and converted Brian Kibler, Brock Parker, edt, and William "Huey" Jensen (among others )to his cause in the process. He's playing the "Mantle Affinity" deck that exchanges some staple Affinity cards in favor of the equipment that turns every one of their creatures into a Birds of Paradise. He swears he didn't actually brainwash anyone into thinking the Mantle is good, but it's hard to believe how many players switched over to Herberheezy's decklists at the last minute. Marc explained the reasoning behind his decision to us this way:

"You can get the best series of turn 1 plays possible with this deck. Paradise Mantles are in there in place of Welding Jar or Chromatic Sphere. In my opinion, it speeds the deck up a little bit and fixes your mana. Basically what happens is that Mantle gets you another spell on turn 2. A lot of times, you lose one damage to equip it, but you get an extra mana on the next turn, making you a bit more explosive as the game goes on. Night's Whisper is also in the deck and is good against all the decks that attack your mana and try to go one-for-one with their artifact removal. The only deck I don't like it against is the mirror, but it's pretty good everywhere else. 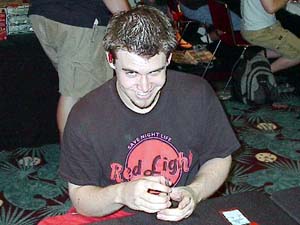 Kibler has actually taken things one step further by including not only Paradise Mantle in the maindeck, but also by adding Qumulox and a couple of Islands to his sideboard (to go along with Terror and Furnace Dragon as well). When asked to explain his madness, Brian had this to say:

"Paradise Mantle lets you play with all the good cards. You get to play with more card drawing than any other Affinity deck, plus Cranial Plating, Shrapnel Blast, and Somber Hoverguard. In the Vial version, your mana is so bad that you can't consistently cast things like Blast and Guard, so you either lose those spells, or you risk losing to color screw. With Mantle, you get to play with Qumulox, Furnace Dragon, and pretty much anything you want to. The Mantle is solid.

"The reason why I'm playing Affinity is because everyone thinks that their decks deal with Affinity, and they honestly don't. Against decks with a ton of artifact destruction, you bring in Qumulox and they just die, and you win nearly every single game 1 matchup in the format, and then games 2 and 3 are usually 50/50 or 60/40 against you, which is still pretty good odds when you are already up a game."