Pretty much by definition, Cube decks are awesome. But sometimes, they're awesome-r. Sometimes, they look something like the monstrosity Alexander Hayne piloted to a 3-0 finish here today. Sometimes you get to Recurring Nightmare + Griselbrand.

If you're anything like me and have been playing for a million years (approximate), the first thing that's going to catch your eye is this beauty of an old-school combo that once ruled the roost:

"Two cards you don't want to be staring down, as Hayne's opponents would nod their heads to.

This pair of enchantments once created such a powerful tutor/reanimation engine as to win a World Championship, and Hayne was able to pair them along the way to drafting his black-green monstrosity. They do so much in this deck that I'm kind of sad Hayne only had three rounds to run over people with it. 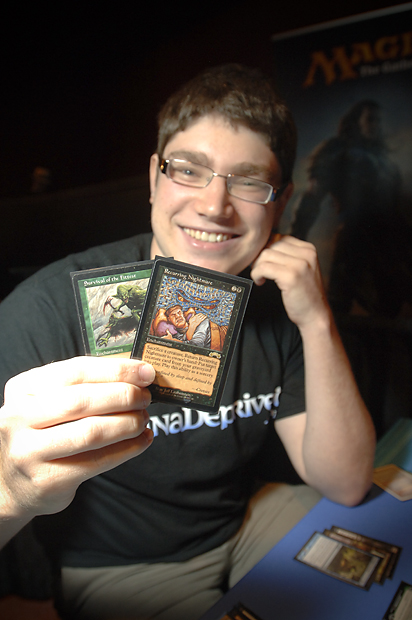 Alexander Hayne shows off part of his deck.

How about bringing back Eternal Witness or Shriekmaw for all kinds of value? How about turning in Sakura-Tribe Elder or Glen Elendra Archmage without actually losing either creature? Or how about getting to recur Massacre Wurm multiple times in a turn, which is fully possible with enough mana?

But I've gotten ahead of myself in my excitement. How in the world did Hayne put together such a beautiful specimen?

Though he picked two blue cards to start the draft, Hayne received a major signal for his third pick with a Primeval Titan, one of the signposts of the format.

"Really what got me here was third pick Primeval Titan," Hayne said. "It's one of the cards you really want for ramp, so I knew green was open, at least two packs to my right."

After that pick, Hayne was rewarded with Sakura-Tribe Elder, Rampant Growth, and Pernicious Deed in quick succession, the latter a card he took as a sign that he should go black-green. Late Massacre Wurm, Bane of the Living, and Graveborn Muse further cemented that, along with a Sphere of the Suns.

But things got really interesting in pack 2 pick 7 when he found Recurring Nightmare.

"Recurring Nightmare was already good in my deck since I had value creatures like Eternal Witness and Shriekmaw," Hayne said. "But Survival of the Fittest makes it insane."

And it was. Picking it up third ended up being an incredible bargain for this particular deck, whereas Hayne said he thinks the card is often overrated just because it was banned in Legacy.

Tooth and Nail ended up being a key card as well, giving him another way to get Griselbrand into play beyond just ramping or reanimating. And Griselbrand was, well, Griselbrand. 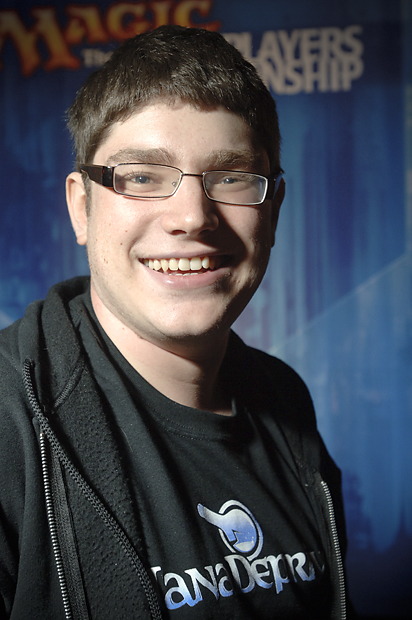 Alexander Hayne built a thing of beauty in the Cube Draft today.

He said his best play with the seven-mana sorcery was when he had a flipped Garruk Relentless in play and exactly seven mana. He used Garruk's search function to find Griselbrand, got it and another creature into play with Tooth and Nail, and proceeded to draw seven cards to run away with the game.

And while the Blue splash may look odd, Hayne said it was virtually free, off Underground Sea, two mana stones, a single Island and Rampant Growth, and helped fill holes in his deck. Trygon Predator was his only way to deal with artifacts and enchantments and Glen Elendra Archmage is fantastic against spell-based decks that Hayne thought he might have trouble with.

It was a thing of beauty, taken from us after just three short rounds. Three short rounds that have Hayne off to a 3-0 start, standing tall at the top of the standings among the best players in the world.