Does winning back-to-back Grand Prix count as outdoing yourself if you've already made three Grand Prix Top 8s in a row, including a win, earlier in your career? That's the question Yuuya Watanabe is left with after conquering Shanghai and Pittsburgh in the lead-up to this Pro Tour weekend. The former Player of the Year is widely regarded as one of the current End Bosses of Japan, alongside Hall of Fame inductee Shuhei Nakamura, and Shouta Yasooka. Surprisingly, Watanabe only has a single PT Top 8 to his name. He fell short again this weekend, but believes firmly in the deck he chose for the format: Pyromancer Ascension.

The deck works simply on paper: Resolve the eponymous enchantment, tick it up to two counters with your suite of twenty cheap-to-free draw effects, net yourself mana with copied Manamorphoses, and use Noxious Revivals to double up on whatever you're missing. When you grow bored of manipulating your resources, kill your hapless opponent with however many Lightning Bolts it takes. 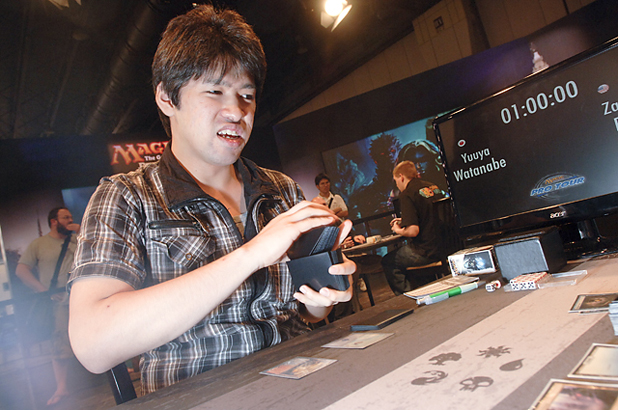 Yuuya Watanabe is big in the world of pyromancing.

In practice it's actually quite difficult to get yourself to that position, as the correct decisions don't look that different from the incorrect ones.

Watanabe settled on Pyromancer Ascension early in his testing. It offered him many of the things he looks for in his decks: speed, consistency, and resistance to hate. The only problem? Watanabe discovered that his straight blue-red version wound up with a number of matchups where winning the die roll was simply too important.

The solution for a combo-heavy field? Draw on the power of Duress. It proved to be an all-star all weekend. His mana base shows just how well the fetch land / dual land combination facilitates a splash. His eighteen-land, three-color deck has the luxury of playing six basics.

Having played against the field, Watanabe insists he wouldn't change a single card in the main. His only regrets are in his sideboard. The dearth of control decks means his Dark Confidants were woefully underused. Also, the Firespouts he had in his board for aggressive decks proved unhelpful against the aggro decks in attendance, a complaint I've heard echoed by those playing Red-Green Twelvepost. In their place he'd like some more ammunition against combo, probably more Mindbreak Traps, and more Ancient Grudges for Affinity.