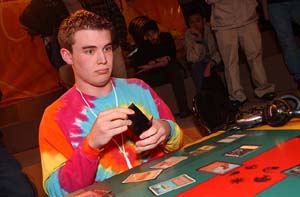 Brian Kibler didn't get his reputation for being one of the best deck design minds in the game by sticking to the tried and true. He had his hands in some of the most influential designs of the last few years.

At the 2000 World Championships he had helped work on the Tinker deck that shared the finals, as well as the Masques Block Constructed Nether Spirit deck. His fourth-place finish at Pro Tour Chicago in 2000 with his own Red Zone design confirmed his skills.

Since then he's invented and destroyed the metagame with his Top-Notch Tech series on Sideboard Online, and his red-blue-green madness design had a party at the expense of U.S. Regionals.

Now consider the fact that Kibler's been working for months with some of the best minds in the game. The result of that work is this standard deck. The so-called "Mini-Colony", composed of Kibler, Ben Rubin, Brian Hegstad and Eric Froehlich, working closely with the German contingent of the defunct Godzilla team, have come up with what they think is the format's best deck.

Now, the first Magic Colony was a "success" only in that one of their members took the day at Pro Tour - Osaka. However, Ken Ho wasn't running the deck that the Colony designed. This time, though, it seems like they've really come up with something to shock the field.

For Brian Kibler, it all started with the idea of designing an aggressive deck that could take advantage of Fire/Ice and Flametongue Kavu, two of the most important removal spells in the format. He initially spent his testing working on a blue-green-red design, drawing power from Roar of the Wurm and Arrogant Wurm, some of the best creatures available.

But something nagged at him. It seemed that some of the best, and most obviously powerful, spells from Judgment were simply being ignored. It wasn't that players thought they weren't powerful, it's just that they weren't playing with them. Phantom Centaur, Anurid Brushhopper and Glory, none were being thrown down.

Look at Glory. It makes your creatures unblockable. It renders them immune to targeted removal. In a pinch, it can even go to the air for three. Phantom Centaur is so big it's ridiculous, and Psychatog can't even block it. Or Demise it. Anurid Brushhopper dodges everything that's thrown at it. Not only that, but players weren't expecting them in a metagame of Roar tokens and Psychatog, so their power would be that much greater.

The other defining element was Living Wish. Tutoring power gave the deck the ability to bounce back from terrible situations, and without sacrificing its aggression. The drama was played out again and again: The early creatures would hammer the opponent, and they would find their salvation card, something like Worship or Ensnaring Bridge. Living Wish would find the answer and end the game then and there. It even acts Lay of the Land for City of Brass in emergencies.

Even in the very early stages, it was clear to the Mini-Colony that this deck was for real. Brian Hegstad spent a lot of his time as the "opponent", and couldn't stress enough how frustrating the deck was to play against. Not only are the creatures, on average, better than the opponents, but the versatility afforded by the Wishes meant that they could trump opposing strategies.

Red Zone 2K2 shares a lot in common with its namesake, the original Red Zone. Mana creatures power out superior creatures, while utility cards handle games that cannot be solved with aggression alone.

The seven mana creatures jump start the deck. An opening like Bird, Brushhopper, Flametongue Kavu is hard to handle. However, unlike Opposition decks that are wrecked by Fire/Ice, needing to get lots of creatures into play, Red Zone 2K2 needs only one early mana producer. Fire is unfortunate, but rarely devastating.

Beats are supplied by the Brushhoppers, Call of the Herd, Phantom Centaur and the perenniel Wild Mongrel. Glory is the heart of the deck. One copy resides in the sideboard only so that the deck can run six virtual Glories. Too many strategies are invalidated by it.

Wax/Wane is another concession to worst-case scenarios. In Kibler's words, it's never truly awful. It often trades for a creature in combat or a removal spell when it's Wax, and when it's Wane, it's worth its weight in gold, dispatching thing like Opposition or Worship which could destroy the deck.

The sideboard is also very interesting. There was a period during testing when the Living Wishes were removed from the deck. Not because they weren't powerful, but because the Colonists felt that they couldn't spare the space in their 'board. However, they soon found that cards they considered essential, like Seedtime, just weren't that good in the matchups they were for.

The result is a tutorable board. Phantom Nishoba answers an stalemate versus another aggressive deck. Genesis crushes control decks. Thornscape and Thunderscape Battlemages handle surprise artifacts and enchantments. Sylvan Safekeeper frustrates targetted removal. Intrepid Hero, if you remember Intrepid Hero, is for Quiet Speculation decks. They can't remove him, and he taps to kill Arrogant Wurms, pumped Mongrels and Roar tokens.

The rest of it is just goodstuff. Global Ruin puts Psychatog back to just island. Simoon wrecks Opposition. Reprisal busts up fatties at a discount.

Looking at matchups, the deck's best weapon is its use of cards that players aren't considering in their metagame analysis. Aggressive decks, because they are usually so focussed, are at the mercy of their opponent's decks' ability to answer their threats. Players working against the Red Zone 2K2 will have to work harder to deal with problems.

Kibler and Hegstad said the same thing: "I'm confident we have the best deck for the format."

Opposite the Colonists' excitement about the deck is the Germans' reticence. The Mini-Colony worked closely with Kai Budde, Christoph Lippert, Patrick Mello and Mark Ziegner. Overjoyed at their find, they sent the deck and testing results to the Germans. And yet today, Kai and his crew are running Psychatog.

Kai's justification: "It's a creature deck, and I don't like playing creature decks." There's more to it, of course. In addition to being more comfortable with a deck that took him to 6-1 at Euros, Budde believes that there are difficult matchups for Red Zone 2K2, while there are no truly awful ones for Psychatog. However, at the end of round three the five Colonists are a combined 12-3. Kai, naturally, is 3-0 himself.

4 Call of the Herd 3 Living Wish