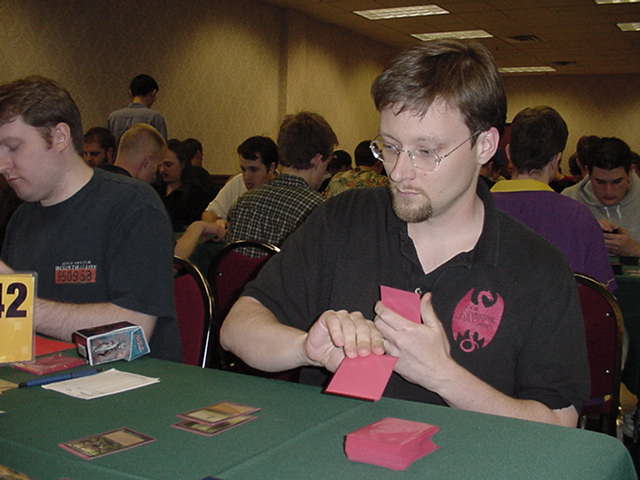 Rob Dougherty: the owner of Your Move Games, a pro tour champion, and all around great guy. Rob had three byes today, so it gave him time to sit down with me and discuss his deck choice for the day.

Ben: How are you doing today Rob?

Rob: I'm doing all right, thanks.

B: So tell me about your deck for today.

R: I'm playing a squirrel deck with Opposition. I've worked on Type 2 for two or three days. You know I've been busy, with my wedding and honeymoon last month, followed by (Pro Tour) Nice and then some store stuff I need to take care of. That only left me a couple of days to playtest this, so I'm going in cold.

B: But being from Your Move Games, you probably have a lot of guys working on Type 2 decks right now (for Nationals).

R: We do, but I built this one myself. I could have played a stock deck-they have a lot of advantages, since they are already tweaked and field-tested, so you know how they'll perform. But I love deck design, and I think it's best to have decks that people can't sideboard well against. When you're building a deck, you need to take a look at all the best net decks at the time. Then you see what people are sideboarding against them, and make sure your deck isn't inadvertedly killed by other people's sideboards.

B: So to make a leap in logic, you wanted to play a deck with a lot of good enchantments, since not many people are playing enchantment hate right now in this format?

R: That's part of it. Most people don't play anti-enchantment right now. There are some anti-Trenches since that deck is becoming popular (Tommi Walamies won the Finland Nationals with this deck), but the Goblin Trenches aren't the problem card in that deck. By the time the get the Trenches down and going, they've already won. So I don't expect to see too much enchantment hate.

B: So what can you tell me about the composition of your deck?

B: You didn't run Chatter of the Squirrel though.

R: No, I like the larger beefy creatures. The last change I made to the deck was to replace Werebear with Llanowar Elves. Yesterday, I decided to run the (Spellbane) Centaurs main deck. Since I had so many three drop spells, it was more important to me to have eight one drop mana creatures than to have the Bear, since I wanted the best chance of dropping a three drop on turn two.

B: So how much did you test this deck in the last few days?

R: Quite a bit. I built the deck on Magic Online, and played against a lot of other Your Move Games guys online. Because of the level of competition, it's not the best playtesting tool for tournament play, but you can learn whether your deck is horrible or not. I was worried that my mana base was going to be an issue, for instance, since I'm running Deserted Temples. They were really fun in mono green for block play, but I was concerned that they might really screw up my mana base here, since they are colorless and I want to run so many color specific cards. But I went 10-1 with the deck, and even though I had triple green for Beast Attack and double blue for Opposition, the Nests weren't a problem. In fact, a lot of times they helped me by untapping a second blue land or third green one to cast those spells!

B: Any thoughts on the matchups with this deck?

R: It's really strong against red/green. I have a lot of beefy stuff, which they hate to see, plus the flashback creatures. If I get Squirrel Nest going, the game quickly can spiral out of control as they can't catch up.

B: Plus the Opposition must help.

R: It's really not as important a card in that match, but it's important against B/G decks, like those that run (Pernicious) Deed and Spiritmonger. The Opposition is there for locking down the more control based decks. The most important card it stops is Upheaval.

B: So are you using this tournament to playtest this deck for Nationals?

R: There are really two approaches to that. In the first, you can hide tech for Nationals, and in the second you can just run the gauntlet with the deck. I think my deck will be good in the metagamed, but it's not exactly groundbreaking.

B: So in this case you just thought it'd be good to play here.

R: Yeah, I want to run something brand new for Nationals, if it's viable.

B: One of the best things about type 2 right now is the diversity in mana bases. Dual lands, filter lands, Lairs, all those cards make any color combination of decks possible, which must be a deckbuilder's dream.

R: It's a pretty wide-open field, and there's room for new decks out there. It's a huge advantage when an opponent doesn't know how my deck functions. Even if they have a decklist, they still won't necessarily know how to play against it.

B: So let's discuss your sideboard. Compost and Gainsay are pretty standard, but I notice that you're playing Alter Reality. It seems that it's been becoming popular lately.

R: It's a very fun card, and a great card to design a deck around from the get go. It had very powerful potential, between the flashback and the low casting cost. It can mess with a lot of cards out there. I don't want to take credit for it though, since Josh Smith gave me this idea.

B: So it's Josh Smith tech.

B: How about the Kavu Titans?

R: It's a solid card. It can power up Green. Against red/green, it serves two purposes. It's an early blocker, and later in the game it's a 5/5 creature for five mana. It's a beast later, and red/green doesn't like playing against beasts.

B: Ok, so why play only one Disrupt?

R: I've found that the first Disrupt you play is the most powerful. It puts the opponent in a really frustrating situation: do they play the rest of the game paying one more mana for their spells, or do they ignore it and turn it into a really amazing counterspell for you? Just having that one copy in your deck is a huge psychological advantage. They'll be times where I have it in my hand in the second game and don't need to cast it, but I do it anyhow just so my opponent knows it's in my deck. That way going into game three they'll have it in their head that I have them in my deck, and it will effect the way they play.

B: One last question for you Rob: would you play this deck if you had no byes?

R: Absolutely. In fact, I think it's even better then!