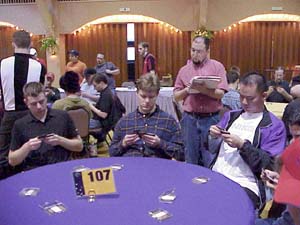 Ben RubinI sat down with perennial favorite Ben Rubin after the first booster draft on day two of Grand Prix Tampa. During the 30 minute deck construction period, I got to ask him a few questions about his draft.

Ben Bleiweiss: So how do you feel your draft went?
Ben Rubin: Not great, not horribly. I wish I had picked that Psionic Gift (First pack, 2nd Pick) over the Ghastly Demise, but that's in retrospect. Obviously, Black is better than Blue in this format right now. Plus, Ken (Ho) sitting two to my right always plays blue, so I wanted to avoid it.

(Ben Rubin laid out his deck by casting cost. He puts the creatures on one side and the non-creature spells on the other side).

BR: Well, I have 18 good cards, and I guess I can add these (adds Ghastly Demise and Mystic Familiar to his otherwise W/U deck).
BB: Are there any choices you wish you'd made differently this draft?
BR: I'm really glad I went White. Besides the (Psionic) Gift, the only other choice I might have made differently would be to take the (Churning) Eddy (1st Pick, Pack 3), but Militant Monk is the better card anyway.
BB: Yeah, but it looks like you ended up without any bounce.
BR: Let me see (checks his cards). It's unfortunate, because I really would have liked to have ended up with that Eddy with that card....
BB: Caustic Tar
BR: Yeah, Caustic Tar in the draft, but I think I can race that if it comes out. Plus, I have the (Aven) Cloudchaser.

(Ben Rubin then added Equal Treatment and Thought Nibbler to his to-be-played piles, bringing his total to 22 cards)

BB: One pick I was curious about: in the 3rd pack (6th pick) you took Equal Treatment over Aquamoeba.
BR: Is that card any good?
BB: A lot of other players like it as an early blocker.
BR: It's all right, but I don't have any madness cards to use with it, so it wasn't worth it to me. (Ben Rubin then began registering his deck). I'll register my cards, and then decide on card number 40 for my deck. Right now I have 18 lands plus a Millikin, and I'm not sure I like that—but I could see myself running it. It might be better than any of these other winners (gestures to a pile with Words of Wisdom, Phantom Whelp, Bamboozle).

BB: So at the beginning of the draft, you were being fed a lot of red cards. What made you decide to avoid them?
BR: The white cards I had at that point weren't good with red. I had Second Thoughts and Kirtar's Desire, which are just awful with red creatures (since red wants to be aggressive, and these are passive removal spells). Moving into red would have devalued my white picks.
BB: Then what made you decide to go into blue for pack two?
BR: It came down to a choice between Aven Smokeweaver and Nantuko Disciple. I like Blue/White better, it's a more natural fit. Green/White doesn't feel too comfortable. Plus, once I got passed Puppeteer I had to play blue, he's just amazing.

(Ben Rubin then finished writing down the last of his cards)
BR: I guess I'll play 18 lands and 22 cards. Words of Wisdom is nothing that I like. I'll have 9 (Plains), 6 (Islands), and 1 (Swamp) along with these 2 (Sac Lands).
BB: You mentioned before that you were happy you went white. How many other white drafters do you think there were at the table?
BR: There might have been only one other white drafter. When I opened my first pack, I almost took the Psychatog and let other people fight over the white. But the first pack was so strong, it had four good white cards, plus Scrivener, Gravedigger, the (Krosan) Archer, and the (Diligent) Farmhand that I felt it wasn't a risk to take a white card, since one of the others would probably come back, so I took the Angel.
BB: And it paid off.
BR: Definitely, I got back the 9th pick Second Thoughts.
BB: So one last question for the viewers at home. What card in your deck is going to be the MVP for the next few rounds?
BR: I feel the best card in my deck is the Puppeteer, he's just incredible, though the Wayward Angel is a very close second. This guy (pulls out Stern Judge), I might be able to punk people with this guy. He can be great.
BB: Well Ben, it's been a pleasure, and thank you for your time. Good luck in this draft!
BR: Thank you.

This is how the draft went. All notable cards are included for each pack. Ben Rubin's picks are denoted in BOLD. 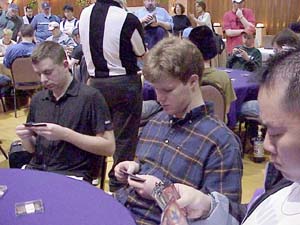