Ben Seck qualified for APAC by making the top 8 at Australian Nationals, but he was unable to make the team and get the invitation to the World Championships in Toronto. He's hoping to get the elusive invite with a top 8 finish here but faced a difficult first table with several experienced players.

"The" Ben Seck's first draft put him to the left of the well-known Japanese player Masayuki Higashino and to the right of Chinese Taipei's Chun-kai Wen, who was wearing a backwards baseball cap and muscle shirt that was very reminiscent of America's Shawn "Hammer" Regnier.

Sitting two players to Ben's right was Jun Nobushita, who has made two Grand Prix top 8s - both a team and an individual. Jun opened first and revealed Zanam Djinn, Probe, Lightning Dart, Harrow, Exotic Curse and Explosive Growth. Nobushita kept his options open by selecting the easily splashable Djinn and Higashino followed up with Exotic Curse, no doubt with an intention to go Black-Red behind the Djinn. Seck, seeing this, quickly grabbed the Harrow giving him lots of options, the most obvious of which is a green-white base. The Probe went next, followed by the Lightning Dart and then Explosive Growth. After the first pack Ben has no green or white players anywhere near him! 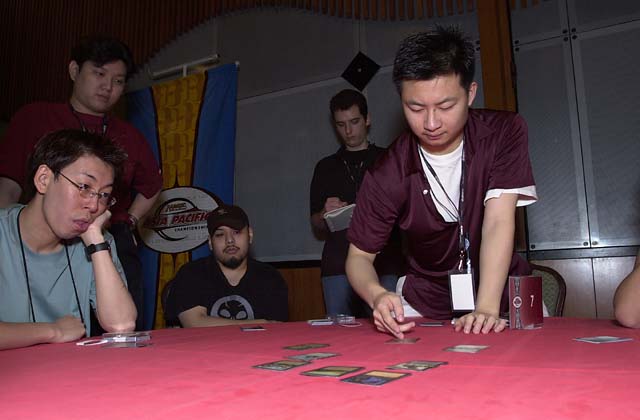 What spectators didn't know at the time was that Ben can't stand playing green-white! He finds that the lack of kill and dependency on tappers makes the color combination very week in an environment with Flagbearers so he refuses to draft it unless he can pick up black kill. With a black player on his immediate right and potentially his left, he didn't think he would ever get any decent spells in those colors and was already aiming green-red.

Higashino opened the next pack and quickly picked up the Probe, indicating that he was willing to take blue cards behind Nobushita on his right. Seck wanted no part of this blue battle and took Serpentine Kavu. This left the Teferi's Moat for Wen and another battle over blue ensued as Fukata followed this up by taking Repulse. Seck considered taking the Repulse, with the intent of going green-red-blue early, but this would likely have been a mistake as then one of the players on his left may have gone green on the Kavu.

The easy picks came to an end for Seck in the third pack with the only really decent cards being the classic choice of Exclude or Repulse alongside Atalya, Samite Master. With his plan already in mind, Seck had no problem ignoring the difficult to splash Atalya and taking Repulse in the middle of four other blue players. At the time it appeared that he may just not have been able to resist the good cards, but in fact it was all crafty planning! Higashino, on Seck's right, picked up Thunderscape Apprentice and Rogue Kavu to firm up his commitment to red.

After all these blue cards, the fourth pack was sure to cause trouble as there was only a single Tower Drake for six players to fight over. Wen picked up Spite/Malice and passed along Tribal Flames and Benalish Trapper. By the time pack got around to Higashino on Ben's other side, there was only a Kavu Aggressor and Explosive Growth, but Higashino took the path less traveled and grabbed Firescreamer! This suited Seck perfectly as he grabbed the Aggressor and Growth. Without knowing Seck's proclivity for green-red, Higashino probably made a big mistake with this pick as if he had taken the red card, most normal players may have tried harder to go green-white.

The next pack put Higashino back into red as he grabbed a Pouncing Kavu. Ben got another Explosive Growth and then a Rogue Kavu when the pack came back. In between Wen selected Benalish Emissary and Treefolk Healer, perhaps noticing the lack of Green-White players to his right, but he ended up black-blue-white in the end.

With three Invasion packs left, Higashino took Recover and left Ben with nothing in green or red. With a choice of Sunscape Apprentice, Benalish Emissary and Llanowar Knight in green-white, Ben grabbed Coastal Tower! It appeared that numerous white cards going by were starting to tempt him, as the Tower would allow him to splash something really phenomenal. Wen took the Apprentice and got the difficult to splash Knight 10th!

The bad packs for Ben continued as he was forced to take Dream Thrush after Higashino took Pouncing Kavu ahead of him. It was almost as if Higashino was setting Ben up by letting a couple of juicy red cards through and then closing the door. Meanwhile white and green-white cards, including Benalish Lancer this pack, continued to go by to Wen on his left.

The final Invasion pack again had no green or red cards for Ben, despite picking fourth from the pack. Higashino took Probe again, only his second blue card, and Ben finally dipped into white and picked up a Crimson Acolyte. Wen seemed happy to take a Phyrexian Reaper and stay with black-blue-white.

So after the first pack Ben was solidly green-red, with a splash of Repulse. There was the chance that he could go green-red-white but Crimson Acolyte really isn't a splash card and with Wen on his left playing white, it didn't look like much would come through in Planeshift. Higashino was firmly black-red with a blue splash, with Nobushita on his right playing blue-white-green.

Despite many player's opinion that Magma Burst can go into any deck, no matter what the color, at this table was picked third by Kuo after Lashknife Barrier and Bog Down. Fukata, who was playing red to Kuo's right and picking next was less than thrilled at this turn of events. Wen picked up a March of Souls a bit earlier than most would take it, leaving Ben with Sparkcaster - a great card for Green-Red. Higashino stayed solidly in black-red with Lava Zombie.

Kuo continued to frustrate Fukata by taking Strafe out of the second Planeshift pack. This sort of switch often sends ripples through the table as the remainder of the drafters try and react to this sudden change and it looked like that was going to happen as Fukata picked up a Terminate. But his dabbling in black-red was to end there, much to the relief of Higashino, the other black-red mage at the table.

In the second pack, Ben took a Thornscape Familiar over Horned Kavu, a pick that many would disagree with. Considering the larger creature size in Apocalypse, as well as the existence of the common pinger Razorfoot Hunter, the Familiar is not as good as it used to be.

Ben pumped his fist when Shivan Wurm was opened to his left but was unable to pick up the second Shivan Wurm that was opened two to his right. He steadily resisted going into white outside of a single Mirrorwood Treefolk, though he continued to pick and choose select blue cards by taking Rushing River first over Gaea's Might, Magnigoth Treefolk and Rith's Charm. It appeared that Ben had his steady game plan and he kept to it. Higashino kept to his colors as well and was rewarded by opening Tahngarth though there was little else of the traditionally strong red Planeshift cards that got to him. Others at the table were a little more varied, going into a third, fourth or even fifth color for one of the many Terminates opened at the table.

Apocalypse is where things tend to get really hairy, and this draft was no exception. Despite not drifting into any other colors in the first two packs, Ben took Death Mutation over Living Airship in the first pack. He then followed this up with Coalition Honor Guard over Minotaur Illusionist! While he could have had an excellent green-red-blue deck, he was now stuck with a green-red deck that was going all over the place splashing blue, white and potentially black spells! As one would expect, Ben started picking up Lay of the Lands whenever possible, taking one first from the pack he opened! But then he seemed to take this too far as he wheeled a second Lay of the Land along with a Kavu Glider over Squee's Embrace. Ben just didn't seem too sure of what colors he was going to end up playing.

In the fifth Apocalypse pack Ben picked up a Temporal Spring 10th but even that didn't seem to convince him to go blue as he next took the sub-optimal Glade Gnarr over Guided Passage, the equivalent of Ancestral Recall in green-red-blue.

Ben's draft was going quite well until the final set of packs where it started to veer all over the place. It could have been that he noticed the lack of red-white players and decided it was worth the fourth color, or it could have been that Nobushita, who was taking blue-green cards two to his right, scared him away from blue. But either way, his deck was much worse for it as he could have had an excellent green-red-blue deck. Afterwards he admitted that he had made a mistake with a couple of picks and he ended up not using the white cards except as a transformational sideboard option forcing him to use some weaker cards such as Tundra Kavu. I expect that he will be able to defeat the more random four and five color decks at the table, but will be defeated by the tighter and more honed three-color players. So depending on match-ups, 2-1 or 1-2.