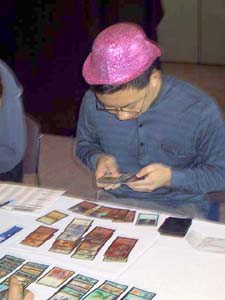 After a disappointing result in the draft portion of day 2 at the recent GP Ben Seck was looking to kick off Australian nationals with a strong deck. After taking a first pick Cephalid Looter in an otherwise weak pack it looked as though Seck would try to settle into a U/x deck. When the second pick was passed to him he had the choice between an Ember Beast, a Chainflinger and a Second Thoughts. Seck decided on the Chainflinger which he later reflected was a tough option because if he took the Ember Beast he felt that he would have to steer towards drafting a faster red green deck and he was not too keen on doing that. When he third picked a Mystic Zealot it looked as though the Chainflinger may have not been the correct option, but Seck was sticking by what he had drafted explaining that he isn't a fan of the instant spell.

After that pick the card quality at Seck's disposal was terrible, netting him a Halberder and a Pilgrim of Virtue. Just when his choices were starting to look like he could be piloting the 0-3 deck at the table he drafted a late Kitar's Desire, however he was still disappointed. Heading into the next set of boosters it was clear that Seck would need a bomb to be opened either by him or by one of the players passing to him.

To his right Tristan Gall was drafting a U/G deck that turned out to be one of the best on the table with good shots at both green and blue from both of his sides and to his left Johnny Linke was drafting a green black deck.

When Seck opened his second pack he was greeted with a Master Apocathary and a Dwarven Strike Force, after some deliberation Seck placed the Strike Force into his pile and prepared for the next pick. As he shuffled through the pack he noticed a Patriarch's Desire and thought long and hard before deciding not to shift into black, instead he took a Firebolt. His next four picks of the draft were quite impresive with another Strike Force, a Mad Dog, a second Firebolt and an Ember Beast. The most noticeable part about these picks was the fact that a Sylvan Might, a Squirrel Nest and a Nantuko Disciple had all slid past him straight into the deck of Gall. Seck's deck was looking quite average and with Torment coming up red white isn't exactly the best colour combination to be drafting.

First Pick of a Hell Bent Raider showed just how average red can be, and it was no surprise when the second pick provided him with a Skywing Aven, with no other red or white cards of note in the pack. Seck did however pick up two Teroh's Faithful and a late pick Balthor the Scout, which he can use to pump his 3 barbarians. Overall his draft ended up reasonable but nothing special, which is hardly surprising for a R/W colour combination.