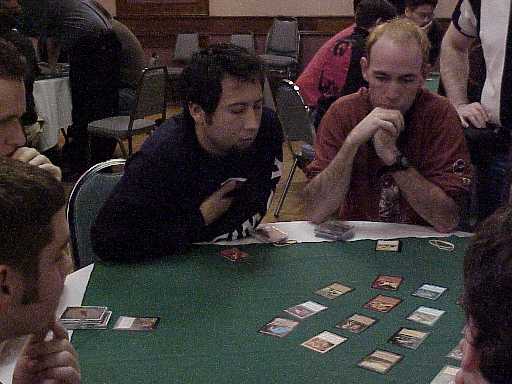 For the first draft of the second day of Grand Prix Dallas, the reigning Player of the Year sat down next to the man who has been ranked #1 in the world in Limited for most of this year. Bob Maher and Trevor Blackwell each went 6-1 yesterday and a good performance at table three this morning could lead to a seat at the final table tonight. While one might think they'd be unhappy when they were randomly seated next to each other, many pros think it's an advantage to sit next to another pro because you know you'll be able to predict many of their choices and you know they'll try to cooperate with you. Also, with Maher in seat #3 and Blackwell in seat #4 they had the preferred seats for Rochester draft.

The first pack of the draft was a little bit weak, but it was deep enough to allow everyone to signal their intentions and jockey for color position. Benalish Trapper went first followed by Pouncing Kavu. Maher took Recover third to try to express a preference for black while Blackwell followed with Nomadic Elf, showing a willingness to be the green mage. Loafing Giant, Horned Cheetah, and Cursed Flesh rounded out the meaningful part of the pack. The second pack contained both Tsabo Tavoc and Agonizing Demise. Kyle Lisica, feeding Maher and with a Pouncing Kavu in his stack of cards, decided to go into black and took Tsabo. Maher commented after the draft that e didn't know what Lisica was thinking since he thinks Demise is just better. Maher gladly took the Demise and then mentally shifted into black/blue mode, leaving the black/red cards for Lisica. Blackwell further signaled his intention to be the green mage by drafting Treefolk Healer over (over Repulse, Vodalian Serpent and Slinking Serpent). Dustin Stern had to be happy with his sixth pick Repulse.

Maher shook his head in disgust when he opened his own pack - all it had was an Urborg Drake (which he took) and a Zap (which went to Blackwell). Blackwell then opened up and took the green tapper (Thornscape Apprentice) while passing the blue tapper to the guy on his left, Plague Spores down the line to the #6 seat, and Soul Burn went to Stern. The fifth pack saw Glimmering Angel go first as Sean Smith solidified himself in blue/white while Verdeloth, the Ancient went second. All in all the table showed a high amount of respect for each other's colors. There wasn't much counter-drafting or color switching. Stern opened Rith, the Awakener but drafted Duskwalker instead since he was happy with the black/blue deck he was drafting. Stern was to be even happier in the eighth pack when he wheeled Recoil and Urborg Drake! Maher was the only other black/blue player and he elected to take fourth pick Repulse.

Maher stuck a toe into red during the middle packs, drafting a Cauldron Dance followed by a Tribal Flames. However, both his neighbors were red and he had enough black/blue cards so he got out after those two cards. Maher was shaking his head again when Blackwell opened his second pack because the card quality was just lower than on the other side of the table. His deck was actually coming together perfectly reasonably and I think it may in part have been intended to make his neighbors feel sorry for him so they wouldn't counter-draft him later. Blackwell first picked a Shackles while Maher took the blue/white split card (even though he wasn't white). Maher finally stopped complaining when he opened his own pack and promptly drafted Do or Die. Probe went all the way to Stern fifth. Meanwhile Blackwell just kept drafting Yavimaya Barbarians and Nomadic Elves. 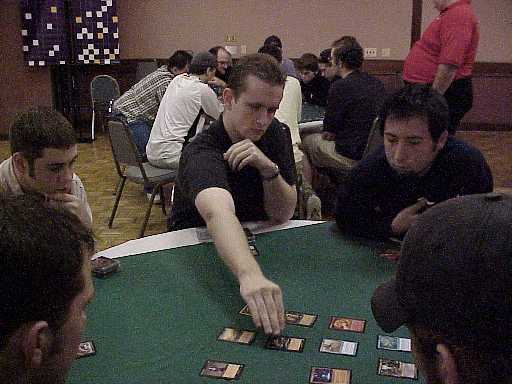 Some of the players started to do some defensive drafting during the third set of packs. Scott Gerhardt took a Spinal Embrace that could potentially have made Dustin Stern's deck absolutely buts. Blackwell killed a Teferi's Moat wit his own first pick that would single-handedly have shut down his entire deck. Gerhardt also picked up his second copy of Meteor Storm and seemed quite happy about it. The next to last pack of the draft was quite interesting: Stern chose to first pick Agonizing Demise over Crypt Angel, which went fourth to Lisica. The power level of the cards on that side of the table went up a bit more in the last pack when Ghitu Fire and Reckless Spite went 1-2.

Blackwell wound up with a really aggressive green/red/white deck. He's got 4 1-drops (3 of which are Thornscape Apprentices) and 5 2/2's among his 6 2-drops. Rampant Elephant, Glimmering Angel, and a smattering of red removal should help him bust through for the last points of damage if his tappers aren't good enough. I'm honestly not sure how good his deck is, but his strategy is at least interesting.

Maher wound up with what is supposed to be the good colors and the good deck. He's got a healthy dose of bounce, a couple removal spells, and reasonable creatures. His creatures are a bit on the expensive side, which is why he drafted Mourning over Phyrexian Reaper late in the draft. Maher does not seem to subscribe to the same theory as Dave Humpherys, who went 7-0 yesterday combining bounce and removal with cheap creatures. Only time will tell whether quality or low-mana cost creatures are more important in the black/blue(/red) archetype.