For Blake Quelle, Orlando has to be one of the most comfortable places in the world to play. Five years ago in this very venue, he placed in the Top 8 of the first ever JSS World Championships. He then followed up a year later with another JSS Top 8. This year, he won Southern California Regionals for the second time. The first time, a few years back, he won with his trademark Mana Flare/Palinchron deck. After yesterday's Standard portion, Blake is in seventh place and has a great chance to make a run at Top 8. 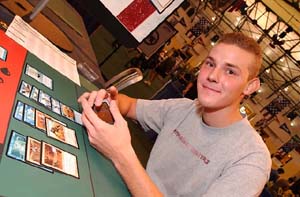 The first pack contained Ghastly Demise, Nantuko Disciple, Shelter and Nomad Decoy. He thought between the Demise and the Decoy, but decided on the tapper. The second pack was filled with great cards, such as Gravedigger, Second Thoughts, Elephant Ambush and Muscle Burst. He stayed on target with white, taking Second Thoughts. The third pick saw him go into a third color, as he took Aven Fisher over Psionic Gift. The rest of Odyssey gave Quelle Syncopate, Scrivener, Hallowed Healer, a seventh pick Shelter, and Mystic Visionary. Torment wasn't nearly as kind. His viable picks in the first pack were Hydromorph Guardian, Balshan Collaborator, or Chainer's Edict. He took the Guardian, and took another Guardian second pick. Taking "Gray Ogres" so early probably did not make him happy, but there were no other picks in his colors, aside from a pair of Balshan Collaborators, which would have simply been 2/2 flyers for four mana in his deck. Torment eventually got a little bit better, as Quelle picked up some card drawing power in Deep Analysis and two copies of Breakthrough. Wonder provided a nice first pick gift in Judgment, and he then used his next two picks to get a pair of Mirror Walls. The fourth pick gave him Wormfang Crab, which was followed by Suntail Hawk, a pair of Guided Strikes, Prismatic Strands and a Phantom Nomad.

Sideboard: How do you feel it went?
Quelle: It went alright. There were no broken cards, but I think my deck is solid. I'm worried about how I'm going to get through, but I was able to pick up a Wonder, and a Deluge. Most of my creatures are on the ground, so Wonder and Deluge will help me break the game open later.

Sideboard: I noticed that you didn't get the flyers that blue/white wants to get. You also had to take Hydromorph Guardians for your first two picks in Torment.
Quelle: I was thinking about taking Chainer's Edict in the first pack, and splashing black because it would be pretty easy to do that. But Chainer's Edict isn't a great splash card.

Sideboard: Right, exactly.
Quelle: If I had known I was going to get a third Hydromorph Guardian late, I probably would have taken the Edict.

Sideboard: You seemed to cut off white pretty well, and coming to you in the first pack it worked out well. You got a sixth pick Hallowed Healer, seventh pick Shelter...
Quelle: I was really happy about the eighth pick Shelter. I didn't think that was going to come. I was happy with the late Guided Strikes too. I could have had three, but I figured with a Shelter and two Guided Strikes, that was enough combat tricks. So, I picked up Phantom Nomad, which is a solid creature.

Sideboard: Were there any specific cards you were looking for that you didn't get?
Quelle: Hydromorph Gull, Aven Windreader...any random big flyer guy. Maybe one big bomb like Glory. I was kind of happy when I got Wonder.

Sideboard: How do you think you'll do with this deck?
Quelle: I think I can pull a 2-1. I didn't see any broken cards, I didn't pass anything amazing, I didn't see any Butchers, the best cards I passed were Chainer's Edict and Crippling Fatigue, and those were the only two good black cards.

Sideboard: I saw you shaking your head when you saw two Collaborators in a row.
Quelle: From my experience, black/blue is really bad, but Collaborators are really good.

Sideboard: Black/blue is really bad in this format with Judgment?
Quelle: Yeah. Every time I've drafted it, I haven't had a winning record. It's dead in the last pack. Your only hope is the blue cards.

Sideboard: Up until Judgment, most people thought black/blue was the best combination.
Quelle: So did I, so I kept drafting black/blue and I kept losing. I like blue and anything but black pretty much.