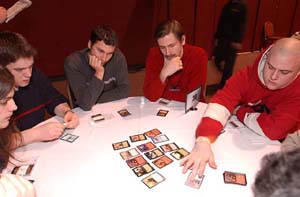 Brian Hacker is clearly this Pro Tour's local favorite. The San Diego native lives only 2 or 3 miles from the event, and got to go through his normal "morning routine" instead of waking up in a foreign hotel. Will this give him any advantage over the field?

I'm sure he hoped it would as he sat down in seat 6 for the first draft of the day. Two chairs to Hacker's right was Pro Tour god Kai Budde, and the rest of the table was full of veterans as well. Around the table:

Joebstl started into red right away with a Barbarian Lunatic, and Hacker followed with Millikin - a great card, but one that unfortunately sends no signals. Szigeti tried to get a toehold in red/black with Halberdier and Innocent Blood.

In pack 2, Joebstl was happy to take Volcanic Dragon, clearly stating his B/R intentions. But Hacker made the interesting pick of the black-heavy Sadistic Hypnotist right behind him. I asked Brian about his decision to draft black behind Joebstl.

"In Rochester draft," said Hacker, "it's often a good idea to be in the same colors as the person on your right if they're worse than you. That way, you really cut off the two or three people on your left, while still getting good cards from the right because the guy misvalues them."

Regardless of what Hacker's statements imply about his respect for Joebstl, that strategy flies in the face of conventional wisdom. And it takes some real guts to try it.

Hacker got a third pick Cephalid Looter, hoping to be blue/black. But in pack 4, Kai passed a Shadowmage Infiltrator to Joebstl, who took it, going into both of Hacker's colors. Hacker bit the bullet and stuck to his plan, having faith in his own ability and counting on Joebstl to pass him playable cards.

Opening bombs doesn't hurt, either; Persuasion in the first pack and Aboshan, Cephalid Emperor in the second will go a long way toward making Hacker's deck work. 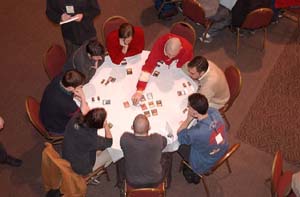 Szigeti, meanwhile, had switched into heavy white; he was left scrambling for a second color, however. Hacker and Joebstl had sewn up black on his right, and the inexperienced Muratoff was all over the map with a three-color R/G/U special on his left. Szigeti committed to blue reluctantly with a sixth-pack Treetop Sentinel behind Hacker's Persuasion, and then he opened and took an Aven Windreader.

Hacker looked to be in a bind with Joebstl taking black in front of him and Szigeti clawing for blue behind him, but he's not one of the best drafters in the world for no reason. He tried to keep his neighbors placated in their other colors (letting Szigeti grab Pianna, Nomad Captain 13th), outdraft them within his colors, and always make sound picks where tough decisions mandated.

In the end, Hacker's deck is a little unbalanced - he certainly cut off black and has the cards to show it - but along with Szigeti and Muratoff, Larkin and Budde were also drafting blue. Five people drafting the same color tends to stretch things thin, and Hacker's six blue cards include the color-intensive Persuasion and Aboshan, making his mana decisions difficult.

He likes the deck and his chances, and hopes to go 3-1 or even 4-0 with it. He figures only two other people have really good decks - Kai and Tenenbaum (who cooperated with each other beautifully). He is also worried about Joebstl, mainly because of the Austrian's two swampwalking Whispering Shades. Hacker thinks that Joebstl will lose early, however, so if he can avoid him in Round 1 he thinks he can avoid him completely.

Of course, fate would have it that Hacker's Round 1 opponent was indeed Joebstl. After winning a close first game, Hacker's bombs - Aboshan, Psychatog, and Persuasion - showed up and allowed him to overcome the Shades.