Without a doubt, this draft table had more than its share of name players. Brian Kibler would like to participate on Sunday as a competitor rather than a commentator. With a Limited Grand Prix victory back in Boston in this format, Kibler has proven that he knows what he's doing when it comes to Onslaught Limited. In the first draft of the weekend, he was seated next to friend Joseph Crosby and Antonio De Rosa, which would suggest that there would be a great deal of cooperation. 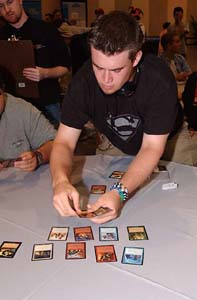 Wagener opened the first pack, which contained Spitting Gourna, Wellwisher, Crown of Suspicion, Gustcloak Skirmisher, Charging Slateback and Mage's Guile as potential picks. Wagener took the Skirmisher, and De Rosa drafted Spitting Gourna. This left Kibler to declare himself as the black drafter, taking Crown of Suspicion. Crosby took Charging Slateback, Wellwisher went to Reitzl, and Szigeti got Mage's Guile. In the second pack, De Rosa opened and gladly took Hystrodon, and Kibler got Prowling Pangolin. Crosby took Secluded Steppe third to show a strong commitment to white. Kibler opened the next pack, which literally contained no good cards except for Shock, so he took it. Crosby was moving into white, but did take a Slateback first, so there was a possibility that Kibler could have been causing a fight over red. That didn't turn out to be the case, however, as Kibler kept taking black cards. He wheeled Festering Goblin and Aphetto Vulture in one pack, and in another took Fallen Cleric, then wheeled Shade's Breath over Blackmail, Crown of Suspicion and Misery Charm, which got some looks of puzzlement out of the table.

In Legions, Kibler stayed on target with Embalmed Brawler, and picked up Withered Wretch in the following pack. When given the option to switch into a second color with Goblin Dynamo or Sunstrike Legionnaire, he decided to stay with black and take Gempalm Polluter. Smokespew Invoker and another Withered Wretch added to Kibler's deck, and he even took Skinthinner over Windborn Muse, staying in one color. In Scourge, he picked up some great cards to round out his deck like Twisted Abomination, Death's-Head Buzzard and Clutch of Undeath. A late Noble Templar made it look like Kibler would take an Aven Liberator and perhaps make that his splash, but he decided to take Tendrils of Agony instead. Undead Warchief was a great gift, and Zombie Cutthroat along with Putrid Raptor will keep his opponents guessing in combat.

Sideboard: How do you think it went?
Kibler: I think the draft went very well for me. I think it was a very strange card pool, and a very strange set of drafting circumstances. We ended up with four very good decks at the table, and four decks that look like they basically can't win. I think that Crosby's deck, and the other white player Wagener, their decks are very good. I think my deck is very good, and I think Peter's deck is too. The rest of the decks are pretty much hopeless. It's like that saying, "Can I mulligan this draft?" Their decks just did not turn out to be good at all.

Sideboard: Do you think that was because of the way they drafted, or was it just the way the cards fell?
Kibler: It was very strange. There were very few quality red cards in the draft. Red is much less powerful in Legions and Scourge than it is in Onslaught, and there weren't many powerful Onslaught red cards. So, there ended up only being three players who even picked red cards for their decks, with the exception of Crosby's first pick Slateback. Going into Legions and Scourge it looked like those players might get some quality stuff, but there really wasn't much. In Legions there were no Skirk Marauders, and only one Crested Craghorn I believe. So, the red decks didn't end up getting much. The green decks weren't fantastic, there were no Undoraks or Savages, there were no Elvish Warriors. A pair of Wellwishers were the only good green cards, other than Forgotten Ancient, which is completely unplayable in (Patrick Miller's) deck. That guy's deck is...I don't understand what he was doing. He took Grinning Demon out of nowhere over Barkhide Mauler, and the Mauler is better than Grinning Demon.

Sideboard: Early on, you took Shock after Crosby first picked Charging Slateback. Were you looking to start a fight over red?
Kibler: There were no cards that I would play in my deck. The pack that I opened was terrible, and I'm perfectly willing to play mono-black. I may actually play the Shock, but it looks like I won't, because I want to support all my double black spells and the Shade's Breath, which got some looks.

Sideboard: Yeah, what was that all about?
Kibler: I took Shade's Breath over Crown of Suspicion, because the way the table seemed to be set, there were three black drafters. That makes it entirely possible to draft mono-black, and Shade's Breath is completely ridiculous in an all black deck. Basically, you just...

Sideboard: Overrun?
Kibler: Yeah. It's not exactly Overrun, but you play it after blockers and it works out really well.

Sideboard: I was surprised you took it, since the pack still had Blackmail, Crown of Suspicion and Misery Charm.
Kibler: I think the card can just be really powerful in a mono-black deck. 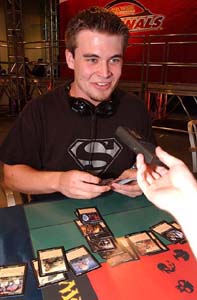 Sideboard: But you didn't know that you were going to go mono-black, did you?
Kibler: I was actually looking to at that point. I pretty much kept all my picks away from other colors. The hardest pick for me in the draft was the Windborn Muse, not taking it and choosing Skinthinner. There were only two white drafters at the table at that point. I would have picked it if I was at the other side of the table, but I was between them, so my white picks really wouldn't be impressive. Also, a lot of the white cards end up being tribally related, and I have a Zombie deck.

Sideboard: Also, I wouldn't imagine that Windborn Muse is optimized as a splash card.
Kibler: Well, Windborn Muse is the best white card in the set, and it only has one white in its casting cost. You don't even need to cast it turn four. You can cast it turn ten and it'll have a big impact on the game. Obviously it's absolutely ridiculous if you play it on turn four, but I've got Withered Wretches that I want to cast on turn two. They're going to take out Peter's Eternal Dragon by the way.

Sideboard: So you never thought about taking a second color? At one point you took Gempalm Polluter over Sunstrike Legionnaire, and an Embalmed Brawler over Skirk Outrider and Unstable Hulk.
Kibler: I think the mono-black deck is absolutely incredible. One card I didn't see in the draft that I wanted is Dragon Shadow. It's extremely powerful, especially against the white/blue deck that Crosby is playing. It actually wouldn't have been fantastic in this particular draft because there were four black drafters, as well as the red player who can kill it. (Dragon Shadow) isn't great against blue/red, it's best against blue/white, and one of them had black. It's still a very powerful card and I would have liked at least one.

Sideboard: How do you think this will do against the rest of the table?
Kibler: I think my deck is very good against the table in general. My worst matchup is probably against the two white decks, which are pretty much the two best decks at the table. Other than Decree of Pain as Infest, I think I have a really good shot against Peter. If I draw Undead Warchief, I can beat just about anyone. It's ridiculous in my deck. I was hoping for it to be opened the entire last pack, and (Miller) didn't take it. He took a Wirewood Guardian I believe, then it got to me. I was really happy about that. Crosby hatedrafted a few things, which I was somewhat frustrated by.

I think I may play Tendrils of Agony. It can be Soul Feast, or better than Soul Feast.

Sideboard: What are you predicting with this deck?
Kibler: I think I'll definitely 2-1, and I think I have a chance of going 3-0. The two white/blue decks are very powerful and Peter's deck has a lot of good cards, but I think my deck has a lot of consistency going for it. I will never get mana screwed other than by not drawing land. I have a lot of good early game and late game. Putrid Raptor and Zombie Cutthroat can be absolutely ridiculous in the beginning, plus I have Twisted Abomination, Aphetto Vulture and all kinds of things for the late game.