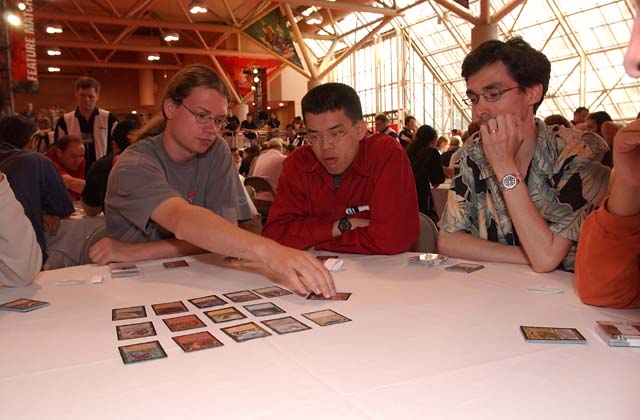 Christian Lührs was 4-2 going into Day Two, having come off of a moderately successful Standard portion to put himself at a decent Draft table... he shares his table with Darwin Kastle, David Bachmann, Gabriel Tsang, Dave Montreuil, Bjørn Jocumsen, Yujian Zhou, and Ming Huang Royce Chai, a fairly impressive talent as far as recognized talent goes. Lührs is in the dreaded eighth seat for this Rochester draft, which is considered by many to be the worst seat at the table, and he is sitting between Yujian Zhou and Ming Huang Royce Chai, with Darwin Kastle before him in the sixth seat. However, things did not look so bad for the "worst seats" after the first pack; which went like this:

Seat One, one of the worst seats by many opinions, picked up the only blue card in addition to the most powerful card in the pack, and Christian received a quite clear "signal" with his wheel of Charging Troll and Wayfaring Giant. The player before him then immediately dived into blue-white, presumably with a splash of Black, which is exactly what the player in front of him had declared himself to be. Darwin Kastle also was another black mage, and so the nearest green mages were in the 2 and 5 seats, sufficiently far away from Christian to help out his chances of drafting a good deck in what many consider to be the worst color to attempt to do so with: green.

All of his neighbors stayed with their initial color choices in Invasion, though Darwin elected early on to splash red in his deck, taking a Tribal Flames over an otherwise-available Duskwalker. Going into the second pack, Christian had to make a decision, mostly about how many colors he was going to play to go with that Harrow he had picked up... taking a Terminate over what would otherwise have been an Aurora Griffin or Amphibious Kavu. Following his new plan, it seemed evident that he was trying to put himself in a position where he was allowed to 'forget' his first picks if the strong cards came, and his Planeshift picks reflected his new plan at least in part:

For Apocalypse, Christian seemed to have given up on the white entirely, focusing more on the black-green Apocalypse cards when the red-white cards didn't show up. Many at the table were disappointed, because only one Magma Burst showed up during Planeshift, and Apocalypse brought none of the powerful red-blue and red-white cards that several at the table drafted their deck around; both Jilt and Goblin Legionnaires were absent, though David Bachmann picked up a pair of Captain's Maneuvers to put the lie to that statement. A pair of Consume Strengths was picked up easily enough, giving Christian's deck the much-needed 'oomph' to fill out his combat tricks and removal spells. In Apocalypse, Christian drafted the following cards:

The final deck he decided to play was: