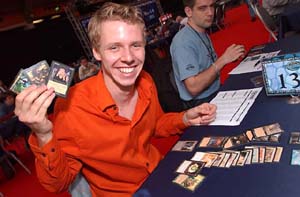 As you all know by now the format of this Pro Tour is Booster Draft. You might also know that Booster Draft was the format of the second day of every Grand Prix in the last qualifying season. What most of you might not have notice is Germany's Christoph Lippert is rather good at it. So good that in the last season he had three Grand Prix Top 8 in the European circuit.

The first difficulty at the table was having to face two Dutch players with the infamous MennoD's fan club t-shirts. With Jelger Wiegersma, Victor van der Broek, Tom van de Logt - sitting at Lippert's right - and a large of Europeans at the table Christoph must have felt right at home.

Things started with signs of trouble has Tom picked Sylvan Might - over Ghastly Demise and Shelter - and Concentrate - over Dirty Wererat and Werebear - while Lippert grabbed Rabid Elephant and Repel. The German backed of when Green started to dry picking up Dirty Wererat and Hallowed Healer. When he got a booster with only an Embolden as a playable card he shook his head. He now knew Tom was going for green and blue.

At the end of the first booster all he had to show was a bunch of playable, yet not amazing, White cards. To his left, Belgium's Frederick Ongena had the start of a blue and white deck. Lippert opened a Mystic Enforcer and thought long and hard about it. He knew he could probably get some good green picks from the left but in Torment Tom would cut him of.

Still he took the mighty Baby Dragon - over Gravedigger and Second Thoughts - hoping to at least splash for it and the Elephant. As he expected Ongena had no trouble passing him green cards, but when the Belgian got a second pick Psychatog thing got messy again.

Now Lippert had Ongena cutting him the good black cards, as he struggle to fit Psychatog into his blue-white deck, and he knew Logt would be getting all the good blue and green cards in Torment. He was in a jam and the best he could do was to hang in there and hope to get twenty-two or twenty-three playable cards.

As predictable the third booster provided no help in the green department but he did get a second pick Mutilate, two Mind Sludges, Carrion Wurm and Mystic Zealot before the good cards dried up.

In the end his colors looked a bit like this:

Lippert: "The mana is the worst problem. I really want to play a lot of Swamps to maximize Mutilate and the two Mind Sludges but two thirds of my deck are white spells. I need to balance this."

Despite all his experience he had doubts all the way to the land station. He scratched the land totals three times and ended up with this configuration: Bog Wreckage, two Forests, seven Plains and eight Swamps.