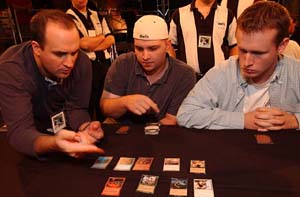 As reported yesterday, Courtney's Boys spent the last ten days preparing for this event at Bob's house in Wisconsin. When pushed for details about their testing methods, Gary revealed that it largely consisted of Neil and Bob watching over Gary's shoulder while he played Magic Online. Gary felt that his famed limited skillz had atrophied during his time in England and needed to have Bob and Neil mocking his misplays in order to sharpen his game.

"All kidding aside," confided Wise, "If you are asking me if we are prepared for this event...

After playtesting against the high quality pool of players at Neutral Ground and Togit, Slay Pillage Fabiano should be well tested in drafting against quality opponents.

Slay Pillage Fabiano won the coin toss and they elected to have their opponents open their packs first.

Pack one offered nothing in the way of bombs and Neil started of with a solid—although underwhelming—Krosan Archer. Bob took an Aven Flock and when the picks came around to SPF there was little left for them. Jon got a Morgue theft, Gerard took a Scrivener and Scott picked up Aven Cloudchaser. Gary got to wheel a Fledling Imp and Auramancer.

Bob opened a much better pack than the first one and was looking at the traditional U/W cocktail in the C-Seat after he picked up a Cephalid Retainer. Jon grabbed Morbid Hunger while Gerard and Scott picked up Treetop Sentinel and Nantuko Disciple. Gary took a Cephalid Scout and Neil was able to wheel a Chatter of the Squirrel and Muscle Burst.

The first three picks of this pack would belong to SPF and they were happy with their choices. Jon got Ghastly Demise, Gerard picked up a second Treetop Sentinel, making green a poor proposition for Neil—in fact, Gerard thought the second Sentinel would send Neil out of green, and Scott picked up an Aven Flock. The next three picks were less exciting with Dwarven recruiter, Leaf Dancer, and Seafloor Debris.

Gerard started off with Dreamwinder and Scott picked up another Aven Flock. Gary grabbed a Diligent Farmhand, threatening to move intop B/G. Neil got Flameburst and Bob got an Aven Fisher that Gerard pish-poshed when the pack was opened and Jon got to wheel Fledgling Imp and Blessed Orator.

Scott gave the first indication that he was thinking about R/W when he first picked a Pardic Firecat. Gary got the all-important Whispering Shade, Neil got a Ghastly Demise, and Bob picked up Cephaild Scout.

Gary opened the best pack so far and it couldn't come at a better position for his team with the first three picks coming to them. Gary nabbed Ghastly Demise, Neil picked up Ember Beast over Liquid Fire--at Bob's insistance, and Bob took Kirtar's Wrath. There were still solid picks for SPF and Jon took a Seton's Desire, Gerard took Cephalid Scout and Scott took Reckless Charge and Liquid Fire on the wheel. Gerard even got his second Dreamwinder on the way back.

At this point the decks were shaping up to look like this:

Gary's pick was pretty simple and he took the Butcher. Unfortunately, the rest of the pack was going to get picked over by SPF before his team would get another crack and there were some goodies to be had. Scott followed through on his threat to play red when who chose Petravark. Gerard made a controversial pick when he chose Deep Analysis over Llawan, Cephalid Empress. His whole team seemed to be on board with the plan and Jon took an Arrogant Wurm. Bob grabbed a Militant Monk and the game breaking Llawan made it all the way around into the hands of the player who was facing a blue deck. The pack was so deep that Bob had to defensively draft a Carrion Wurm on the way back.

Scott was clearly in red when he took a first pick Fiery Temper. Gerard took a Soul Scourge—it was unclear at this point whether this was a defensive draft or a contingency plan in case Llawan made an appearance. Jon took a Nantuko Shade after lingering over Sickening Dreams for a few moments. The Dreams would make it all the way around to Gary.

Gerard took a Basking Rootwalla to open his pack and Jon grabbed a Crippling Fatigue. Bob snapped up a Teroh's Faithful and Neil d-drafted a Militant Monk. Gary took an Angel of Retribution and Scott got to wheel Aquamoeba and Flash of defiance.

Jon took a Chainer's Edict over Possessed Nomad which went to Bob with the next pick. Neil hook dup with a Skywing Aven and Gary got a Waste Away. Scott seemed pleased with Temporary Insanity and Gerard showed he was thinking about black again when he indicated that he wanted the Gloomdrifter and Organ Grinder on the wheel. 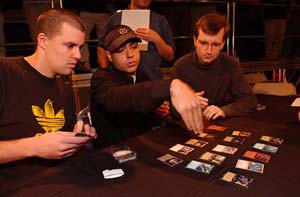 Neil opened a Centaur Chieftain and seemed happy to pick it first. Gary took a Soul Scourge and when the cards swung around to his side, Scott picked up a Fiery Temper.

After the second set of pack everyone seemed locked in on their colors with the possible exception of Gary who was still B/X.

Neil happily took a Phantom Centaur with his first pick. Bob got to pick up a Phantom Flock and Jon took Sudden Strength. Gerard got a Wormfang drake and Scott picked up an Ember Shot.

Jon took one of the most vital cards in the B on B match-up—Filth! Gerard recruited a Phantom Tiger and Scott got an Arcane Teachings of his own. Earsplitting Rats and Nullmage Advocate were nabbed before Bob nabbed a Vigilant Sentry.

Gerard nabbed a Giant Warthog but not before checking that Jon had a way to deal with Filth that was going to make it to Gary. Jon fanned a handful of Gravegougers and Gerard just let it go. Scott took a Shieldmage Advocate and Gary did get the Filth. Neil picked up barbarian Bully and Jon got to wheel Sutured Ghoul and Anurid Barkripper.

Scott took swelter, and Werewolf, Nullmage Advocate, and Wind Drake were all scooped up in that order by Bob's tram.

Gary got a Battle Screech and seemed thrilled to have it. Neil took breaking Point and Bob got a Shieldmage Advocate.

Both teams seemed to have a pretty good idea of what they were up against. Everyone agreed that the Fabiano match was going to come down to Llawan—although Gerard was positive he would win.

Jon Sonne and Gary Wise's match was clearly going to come down to Filth. Jon felt confident that he could contain the Filth with his three Gravegougers.