Both players have proven their skills in Onslaught-Legions sealed deck in order to earn a seat on today’s draft tables. Crosby, fresh off a tenth place finish at Chicago has shown that he knows his stuff when it comes to this format, while Turian is most certainly one of the more established masters at limited formats. Today, both players find themselves sitting next to each other on Pod 5, Crosby to Turian’s left. 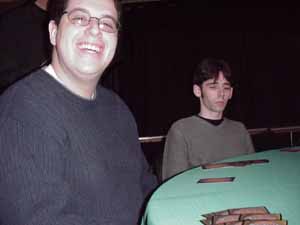 The opening booster presented a rather simple decision for Crosby. The only two cards really worth considering were Sparksmith and Lavamancer's Skill. While it is widely accepted that it is the Skill that makes or breaks the U-R draft decks, something like this is definitely not a commitment you want to make on the very first pick, since the Skill’s value in R-(non-blue) decks drops dramatically. Sparksmith, on the other hand is simply ridiculous, to the point where some people have sworn to picking Sparksmith over some of the format’s other ludicrous bombs. It’s only problem is that it requires a decent commitment to red, but even alone, it functions pretty much like a Skill anyway.

Turian’s first booster offered more options, in terms of colours. While his deck was decent, it was really only a contest between three cards- Mythic Proportions, Spitting Gourna, and Cruel Revival. Turian could have taken the Cruel Revival, cutting off black for the most part (the only other black card of note was a Festering Goblin), but decided to go with the Proportions.

When Crosby received Turian’s goodies, the fact that the rare was missing helped little in trying to determine what colour Turian was into. I found it interesting to note that he chose to eschew the Cruel Revival which Turian had passed, opting to take a Thoughtbound Primoc instead. Then again, Crosby’s distaste for black has already been established, for reasons explained in his sealed deck analysis. Crosby had noticed that the rare was missing out of Turian’s booster, which meant that Turian’s booster really wasn’t an attempt to signal. Faced with the choice of taking the Revival and messing up the signals he’s passing to his left and taking the Primoc, Crosby felt that sending the consistent signal was more important here, and has no qualms about this pick. Bear in mind that players differ on opinion when it comes to these things. Alex Shvartsman, when asked, said that he would take the Cruel Revival without hesitation.

Turian was passed a Spitting Gourna, Battering Craghorn and Mistform Wall. It was no tough decision for him to take the Gourna. Crosby took the Wall, cursing at the Lavamancer's Skill that he passed. The situation is further aggravated by the fact that Turian, on his right, had just been passed a Snapping Thragg, and was now in red. It would be tough for Crosby to pick up enough decent red cards to bring his Sparksmith up in power. Either Crosby’s draft style is one that wanders around the colours with no early commitment, taking what’s left, or he was just in plain trouble. His fourth pick- an Ironfist Crusher gave him his third colour out of four picks. However, the rest of the booster was where Crosby’s earlier sacrifice of the Revival started to pay off. The consistent signal meant that the player to his left knew what colours to stay out of, and eventually, white cards and blue cards came flowing in. Ascending Aven, Fleeting Aven, Riptide Biologist, Daru Cavalier, Gravel Slinger, Battlefield Medic and Foothill Guide rounded up Crosby’s next few picks. Some may find it interesting to note that he passed up an in favour of the Riptide Biologist, although granted, the Biologist is very powerful in a beast-heavy environment.

In the meantime, Turian was heading down the red-green road, following the Snapping Thragg with Wirewood Elf, Commando Raid (from a weak pack), Erratic Explosion, and Wirewood Herald before things dried up. He managed to grab an eleventh pick Wave of Indifference, which was pretty nice. For obvious reasons, Turian’s pool dried up faster, considering that he went for one of the more popular colour combinations.

The second booster presented Turian with the choice of Snarling Undorak versus Words of War. Once again, gold symbols sent glittery stars circling through Turian’s head, and the rare hit the draft pile. Crosby, on the other hand, was in the unfortunate position of cracking open a booster that contained Smother, Spitting Gourna, Goblin Sledder and Glory Seeker. At this point, Crosby was still not definitely into white, and given the fact that he had passed numerous good white cards earlier in the first booster meant that this was not the position to now switch into white. As a result, he then took the Sledder, since it did best compliment whatever he already had, although Goblin Sledder isn’t exactly first-pick caliber.

The Gourna went on to Turian, while Crosby picked up an easy Shock (over Pinpoint Avalanche) from the second booster. The third booster gave Crosby a Gustcloak Savior, and now things went horribly wrong. A white card of this quality could not possibly be coming this late- his earlier signals must’ve meant that the player two seat to his left was playing white. But he was not, otherwise the Savior wouldn’t even be here! He bit, and took the Savior. Mayhem ensued over the next few picks, with four cards of no real note before Crosby managed to get back on track with Secluded Steppe, Daru Lancer, Grassland Crusader, Spurred Wolverine. Not exactly ideal, but it would have to do. Turian, too, did not have a great second pack. After taking the Pinpoint Avalanche that Crosby passed up, he took a Dirge of Dread, followed by a Haunted Cadaver, before things started to look up once again with a sixth pick Krosan Tusker, before the goodies dried up with Elvish Warrior and Spurred Wolverine. At least he got the Wellwisher ninth.

Legions presented the opportunity to round off the decks. Many men, fifteen strong would enter the pool of wannabes, and competition was fierce. Turian gave up a Goblin Goon for a Timberwatch Elf, since the Goon wouldn’t be terribly reliant in this creature-heavy format. Crosby was taking anything white with wings, with airborne support taking up his first three picks. A Stonewood Invoker came second for Turian, then a Goblin Clearcutter. A second Stonewood Invoker and Clearcutter soon floated by, and was drafted in. Abandoning blue, Crosby went into W-R, taking a Goblin Dynamo over both Primoc Escapee and Mistform Seaswift.

Then, Crosby took a Starlight Invoker over a Cloudreach Cavalry for his fifth pick, a decision that Crosby would live to regret. Simply put, he completely forgot about the five birds that he had already taken up, in addition to the fact that the Thoughtbound Primoc is in fact a bird. Eventually, white cards followed suit, rounding off what proved to be a pretty rough draft for Crosby. Turian finished up his R-G deck with his two bigger Orcish Lumberjacks providing fuel to bring out an eighth pick Branchsnap Lorian and a twelfth pick Berserk Murlodont. He took personal satisfaction in rare-drafting a Brood Sliver eleventh.