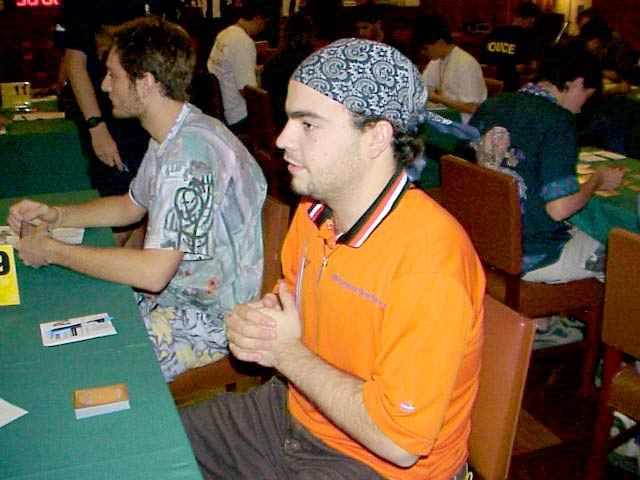 Damian's draft began with a mediocre booster. The only cards that caught his eye were Power Armor and the pack's lone blue card, Stormscape Apprentice. He flipped between the two, almost drafting the Armor. He reversed his decision as the judge gave the instruction to pick. Afterward he told me that not only did he want to play blue, but passing a pack without blue cards would send strong signals to the players on his left, giving him strong blue picks later in the draft.

To his right, Rafael Le Saux was looking at a stack of excellent R/B cards, such as Plague Spores, Shivan Emissary and Plague Spitter. He decided to leave the problem to Damian, taking Jade Leech. Damian sidestepped the issue himself. The pack contained his second Stormscape Apprentice.

His next few picks suggested he was aiming at U/B/w. He grabbed Spite/Malice, Metathran Zombie, Tower Drake and Worldly Counsel. Le Saux was co-operating, settling firmly into R/G with bears and Kavu Aggressors. A Death Or Glory added nicely to his splash. After that Damian saw no more first-string cards.

On his left sat Walter Latorraca of Brazil. He had been scooping up the R/B Le Saux and Brown-Santirso had passed by. So while he threatened to cut off some of the Banishes Damian would like to have, the blue cards would flow freely on the second pass. Damian opened his first booster to find Darigaaz smiling at him from the rare slot. For a moment, he seemed to consider taking him and going the full five colors. Cooler heads prevailed, though. He took the excellent Probe instead.

The next pack showed that his attempt to cut off blue had been successful. He jumped at a Glimmering Angel, but changed his tune when he found Fact or Fiction waiting at the end. His next pick of Slinking Serpent over Benalish Lancer showed his preference for U/B/w over U/W/b, particularly with so few quality white cards. After taking Tidal Visionary, he took a string of white cards including Reviving Vapors, Razorfoot Griffin, Ardent Soldier and the white-suggesting Tower Drake. A Hypnotic Cloud capped his relevant picks.

Planeshift made his deck. He first-picked Rushing River over Death Bomb, passing Terminate and Crosis' Charm the R/B players on his left. Next he had the tough choice of Planeswalker's Scorn, Dromar's Charm or Hunting Drake. He changed his mind several times before settling on the Charm. He took Cloud Cover from a mediocre pack and then snagged back-to-back Aurora Griffins. After taking Confound he had the option of a second Confound or a third Griffin. He took the flier and was rewarded with Confound in the following pack. A Dromar's Cavern to help his mana and an Aura Blast rounded out the deck.

This is the final product:

Damian describes it as "Incredible."