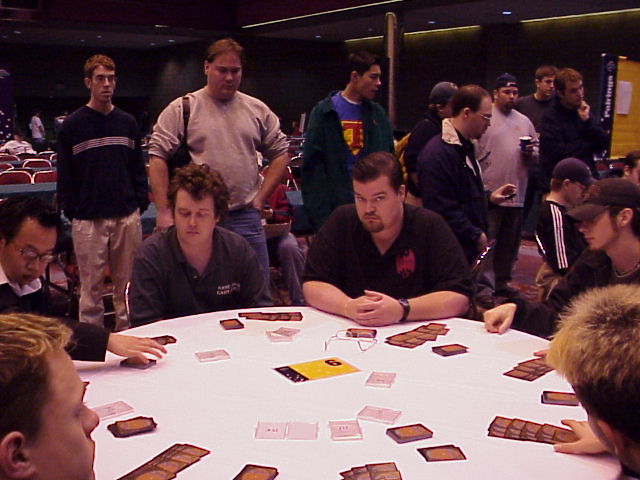 Kastle's first pack included Fires of Yavimaya, Annihilate, Serpentine Kavu, and Thornscape Apprentice. Even if Kastle didn't have a predilection for blue, black, and red cards, he wouldn't have wanted to fight his neighbors for green anyway after they got this back. He took the Annihilate without hesitating. I then looked over to see what Alan Comer was drafting on Kastle's right (feeding him) . . . Plague Spitter. Uh-oh, that looked like trouble. However, Lan Ho took first pick Fact or Fiction on Comer's right and passed Comer Rith, the Awakener! Comer took Lan's gentle suggestion and abandoned his Plague Spitter to draft a red/green/white deck. However, Lan followed up his Fact or Fiction with Noble Panther, Llanowar Knight, and Razorfoot Griffin. He wound up fighting Comer for the green/white gold cards but made up for it by passing Comer a Breath of Darigaaz in the third pack. 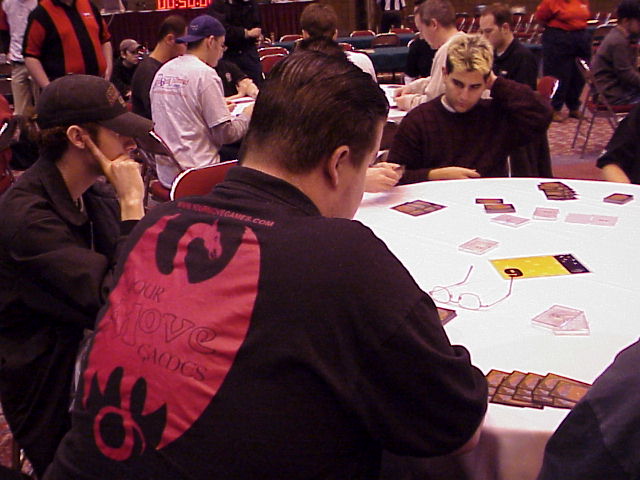 Meanwhile Kastle showed a clear preference for red by drafting Scorching Lava over Stormscape Apprentice. He then sucked down a Faerie Squadron (over Llanowar Knight and Harrow) followed by Plague Spores. It looked to me like he had hooked up Dustin Stern with a solid green/white deck, but Stern instead drafted blue/black/red - the very same colors as Kastle. And Ryan Carpenter had a black/blue/white deck on their right. Welcome to the wild world of Invasion booster draft!

Kastle got barely a drop of blue in the second pack, using his first pick on Faerie Squadron and his second pick on Rainbow Crow. After that he got completely hooked up with black/red cards: 3rd pick Plague Spores, 4th pick Plague Spores, Zap (over Salt Marsh), Phyrexian Battle flies (over Pouncing Kavu because he knew he had 2 faerie Squadrons and didn't want double red spells in addition to double blue spells in his deck), Shivan Zombie, Phyrexian Reaper, and then Cursed Flesh (over a potential second Shivan Zombie). The last pick surprised me, but he wound up not playing the first Zombie because red was his splash color. he other interesting thing that happened in pack 2 was that Kastle passed two copies of Fires of Yavimaya along with a number of other decent red/green card to Comer. 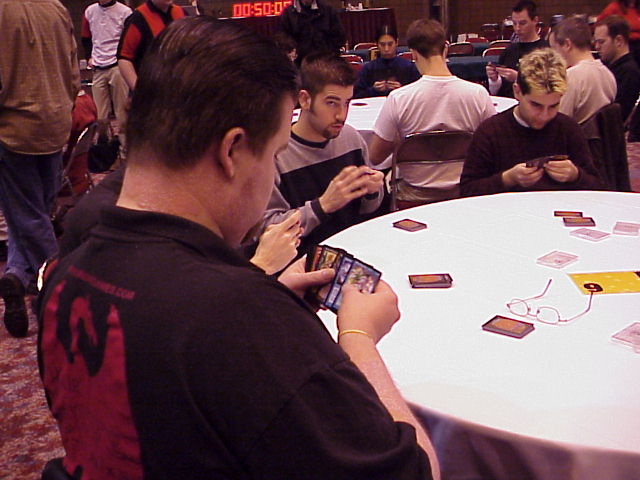 After the draft when I talked to Kastle he said he thought his deck went from "really good to completely nuts in the third pack." "I have . . . dreams about drafting decks like this." His first pick was merely an Exotic Curse (over Plague Spores #4 and Kavu Aggressor). His second pick was Faerie Squadron #3. Then he got passed third pick Blazing Specter! (Lan had taken first pick Benalish Trapper out of that pack while Comer got his Breath of Darigaaz.) Interestingly, Kastle's current (and former) girlfriend Michelle Bush had Blazing Specter in her sealed deck Saturday and first picked it at table 1 Sunday morning. Kastle then took Urborg Drake and got passed 5th pick Fact or Fiction! Kastle says there are no commons or uncommons that he would take over Fact or Fiction so he had no idea what four cards had been taken. It turns out that Lan already had 2 copies of Fact or Fiction by that point and didn't want a third. Kastle rounded out his deck with a 6th pick Soul Burn and a Vodalian Zombie.

Kastle wound up a damn fine black/blue deck that splashes red for 3 x Plague Spores, Blazing Specter, Zap, and, Scorching Lava. "The only thing I can imagine losing to is a Cloaked Acolyte."