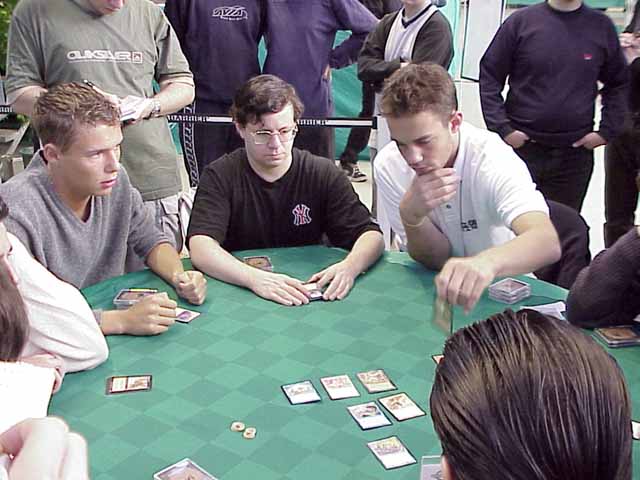 I followed the progress of Dave Williams with Fear on his left and Karlsson on his right.

The first few boosters: Morgan was in position 1. (**** means the rest of the table)

Throughout the rest of the draft these were their dominant colours.

Throughout the first set of boosters, Ruel (sitting to Morgan's right) drafted green aggressively and consistently, but Ed Fear had no such luck - to his right Paco Llopis, having drafted two strong blue cards in the first two boosters, took a Shock Troops over a Coastal Piracy! Ed was really unhappy about this and the two battled for red for the rest of the game.

So at this stage Dave had the great beginnings of a rebel deck whilst Karlsson was comfortably in blue. Ed chose to take the Natural Affinity over Shock Troops and Lure because of his Spidersilk Armour.

Dave took the Kris Mage here because it was a good card against him and he didn't have a second colour at the time. He knew Ed could take two green cards so he was not really stiffing him, but as it turns out the Mage would have really helped out Fear and Williams ended up playing blue/white.

By the end of Masques, Karlsson had strong blue with a couple of red cards, Williams had a strong rebel chain with an Airship, choosing to enter blue despite Morgan to his right although he did not steal it from the Swede as the ship would never have made it round the table. Dave was actually just keeping his options open. Ed had some reasonable green cards but no creatures and was still struggling to deal with the Spaniard resisting him to the left. There were 3 Spidersilk Armours in the Masques boosters.

Unsurprisingly there was little blue in these boosters so Morgan struggled around for his second colour, drafting both red and black cards. (He ends up playing a three colour deck.) Dave has a reasonable time of things picking up a couple of blue cards and increasing his rebel chain. His one questionable pick was an Oraxid over a Defiant Falcon when he had only one 2cc searcher (he later admitted to regretting this decision), but his reasons were plausable.

Mr. Fear did not have a lot of fun in Nemesis. He had 5 shots at Blastoderm without contention but not a single one landed for him. Sure enough, as soon as the boosters were opened to his left, 2 appeared - he was not happy. Nor was he happy about missing the first pick red cards as Paco swiped all the Crushers and Hydras.

The Swede opens an Avatar of Woe and confirms his splash of black with two Seal of Doom to boot. He also manages to sweep up some of the good blue fliers, but having to play three colours might cost him dear.

Williams had a great start to these boosters: Troubled Healer/Alexi/Mageta's Boon and 2 Trenching Steeds to compliment his Defiant Vanguard. By the end of the draft his chain looked fantastic with both a Lawbringer and a Lightbringer, but missing that Defiant Falcon might turn out to be crucial if his Lieutenant gets killed.

Ed manages to get some decent picks in Prophecy (Silt Crawler*2, Berserker, Idol, Wild Might) but once again Paco manages to screw him from seven places away as he defensively drafts a Jorael first pick over a good blue flyer.