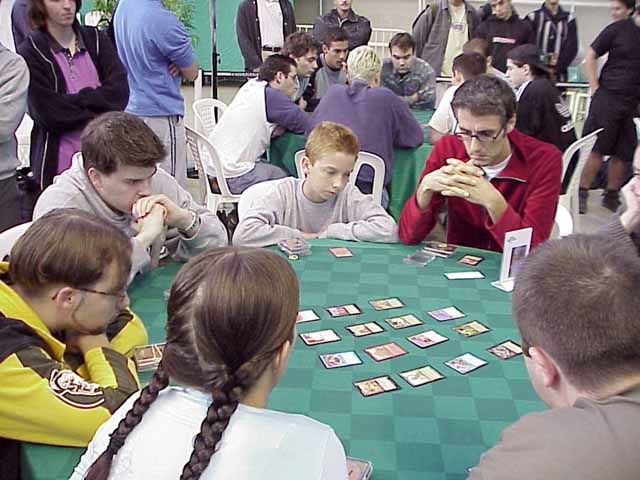 Sometimes even the Pros step into the Twilight Zone. If you don't believe me you can ask David Price. Little did the King of Qualifiers know what he was about to face as he walked to his first Draft. Sitting on the third seat Price had a Portuguese player to his right who is a very young local Constructed player, he had never played Draft before and he could not understand English, his name: Marcio Carvalho.

Most players seemed to be going to extremes when faced with Price's presence: some would look at him after making each pick (waiting for his acquiescence) while others would totally ignore him (probably because he kept shaking his head).

As the draft progressed Price's frustation mounted as the inexperienced players jumped back and forth between colors, must to the dismay of the other players. After a shaky start where Masques didn't give him much to go on, Price managed to bounce back to his orginal option of Black and Green despite the incredibly random picks by his fellow drafters.

Luck seemed to smile, perhaps ironically, at David by giving him a first pick Blastoderm, in fact the only Blastoderm as far as my very tired eyes could see. In the end Price managed to get a decent beatdown deck and could probably sweep the table (or surely 2-1) riding on his huge experience and the weird picks by the rest of the pod members.

With a grand total of nineteen green cards (including two Wild Mights, two Seal of Strength, a Blastoderm and a Giant Caterpillar) and fifteen black cards (including a Snuff Out, two Seal Of Doom and a mighty, mighty Volrath The Fallen) David looks ready to face the first three rounds and move up to a more normal table.