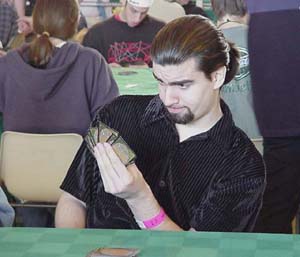 Although Fear never earned a career Top 8, he was becoming a staple on the Pro Tour a year ago, with a string of solid finishes including a Top 16 placing at the World Championship. Then, at Pro Tour-Chicago, Fear was ejected from the tournament and subsequently suspended by the DCI for a year as he drew a card out of his sideboard.

Although Fear maintained his innocence, the DCI did not see it that way, sending him on a year long vacation away from competitive Magic. Now Fear is back, hoping to get back his status as a Pro Tour regular. Problem for him is that when the bye ratings for this season Grand Prix ran, he was still suspended. That means he would earn no byes in the three Grand Prix he played in – including this one. With no byes, Fear failed to advance to day 2 in the previous two Grand Prix – but this time around he managed a 5-1-1 finish after day 1, despite drawing a very mediocre sealed deck.

Now he was ready to draft at table five. The table was not very difficult, featuring five amateur players (four from Italy and one from France). Pro players at the table besides Fear included one time Italian National Champion Luca Chiera and Antonino De Rosa, who earned a pair of Grand Prix Top 8 finishes in the United States. Fear ended up in seat eight, with De Rosa in seat six and Chiera in seat four – all well away from each other.

Fear's first booster pack was mediocre, featuring Crashing Centaur and Resilient Wanderer as the two best cards. Prior to the draft, Fear commented that his favorite color combination for this format is black-white, so he pursued it by picking Resilient Wanderer – it did not hurt that the Wanderer was the best card in the pack. Fear passed only one other white card, Graceful Antelope, so his pack would be unlikely to set any of his close neighbors into his color.

In the second pack Fear picked Painbringer over Second Thoughts, further committing himself to the black-white archetype. The colors of his neighbors to the right were working out very well for fear, as his immediate neighbor was picking mostly red cards with some blue, and De Rosa drafting black-red. With no white drafters for miles (in fact, there was only one other player drafting white at the table, and he was sitting across from Ed) he was able to get a number of excellent cards. In the third pack he picked up Mystic Zealot, while still passing an Aven Flock. Then he was glad to see yet another Resilient Wanderer. Fellow Sideboard reporter Craig Jones commented later that it is one of the most relevant cards for white, and he is right.

The next pick was more difficult. Fear had to decide between Shelter and Patriarch's Desire – both excellent picks, especially to be getting in the fifth pack. After much deliberation he went with Shelter. Yet another choice in favor of white was made in the next pack, as he picked Kirtar's Desire over Gravedigger. Fear seemed to be keeping his options opened as much as possible, with only a single black card – able to switch out into another color if necessary.

Embolden over Sandstone Deadfall and Gallantry over Mirari and Pilgrim of Justice were his next two choices. Ed's own pack returned at this point, with Graceful Antelope still in it. The rest of the packs yielded nothing interesting, but overall his first pack worked out extremely well. Fear had a very solid assortment of white cards while still open to any second color. Unknown to him, Mattia Longo – the player to his immediate right – has drafted a number of white cards, but it did not really hurt Fear. For example, Longo picked a Hallowed Healer out of one of the earlier packs while leaving Fear a Shelter – which is a better pick.

While the very first pack Fear opened was relatively weak, his second pack was a monster. He opened Bomb Squad, Repel, Aven Windreader, Squirrel's Nest, Wild Mongrel, Dusk Imp, Elephant Ambush and Embolden. Fear spent the entire minute trying to decide and finally chose to draft Aven Windreader, moving into blue. Although he picked no blue cards in the first pack, he also did not pass many – so he had a chance at getting some good blue cards from there. In the second pack he drafted his second Shelter – picking it over Afflict and Chainflinger as the only other viable cards in that pack. He grabbed a third pick Cephalid Looter. The blue plan was not working out as he went on to draft Morbid Hunger, Hallowed Healer and Partol Hound.

In the seventh pack Fear was presented with choice of Crypt Creeper of Pilgrim of Virtue. He drafted Psionic Gift over both, unwilling to give up his dream of blue-white. Fear closed off the pack picking Embolden, several Pilgrims, and Phantatog.

In the third pack blue became a far more viable option as he picked two Balshan Collaborators in a row followed by a Skywing Aven. Blue cards kept on coming as Fear drafted Aquamoeba and Compulsion. But it was his next pack that was extremely interesting.

His pack featured Cabal Torturer, Turbulent Dreams, and Obsessive Search. This was a moment of truth. Would Fear play black and take the powerful Torturer, or play blue and take the excellent bounce spell? Fear drafted an Obsessive Search. I strongly disagree with the pick but he defends it. Fear felt that Dreams are not as powerful a card as I believe it to be (and Kai Budde agrees with his pick), while his deck could use Obsessive Search as it combos with a number of cards, including Compulsion and Looter.

Fear picked up a few more cards including Militant Monk, Cephalid Sage and Pay No Heed. Armed with as many as 28 playable blue-white cards, he was ready to build his deck. Fear's build was as below.

There were a lot of good cards and a lot of ways to build this deck. Personally, I would be sure to play both Collaborators and add two Swamps (but no black cards) to ensure that they are often 3/3. Adding Swamps may be a questionable choice, but even without then, there is nothing wrong with playing a pair of 2/2 flyers for four mana. I would have cut Phantatog and Cephalid Sage to make room for them.

My prediction is that Fear will finish this draft pod with a 2-1 record. His deck is not perfect, but it is very solid and is capable of 3-0, but more likely to drop a match, winning the other two.