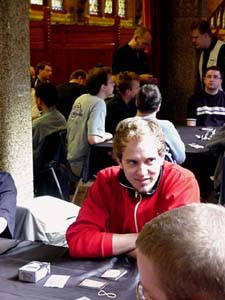 Eivind Nitter was an obvious pick for the first draft report. Not only is he the current European Champion and the winner of the last Booster Draft Pro Tour but this weekend he is facing his worst handicap. A huge handicap in fact. For someone who enjoys the finer things of life as much as Nitter, Amsterdam is surely the apex of temptation.

So our mission at the start of this first day was not only to see how the reigning European Champion adapts to the new format but also to see if Amsterdam's lure won't influence his picks. Things started of with a clear sign. In a pack full of green goodies (Elephant Ambush, Sylvan Might and Springing Tiger) Eivind passed the problem along taking Amugaba over Hallowed Healer and Patriarch's Desire.

This set the standard for the first pack, as Nitter passed green card after green card to his left neighbour fellow Norwegian Christian Flaaten. In a few picks Christian had the start of a good Green-Red deck while Nitter was still postponing picking his second colour. In fact, by the end of the first booster he didn't have a second colour. Apart from several good Blue cards (Psionic Gift, Scrivener, Repel) he had Nantuko Disciple, Thermal Blast and Auramancer.

The only thing that seemed certain was he wasn't too keen on taking Black. He further reinforced that idea with the first pick of the second pack. If in the first pack he had a lot of Green cards to look at Torment tried to tempt him with Black. Faceless Butcher, Soul Scourger and Mesmeric Fiend where not enough to make Eivind change his plan. He took Seton's Scout over Temporal Insanity and seemed eager to trust Judgment for enough Green cards to power a Blue-Green deck.

Finally Judgment arrived, with a few players having to read some cards and Nitter's gambit started paying off. His first few picks were Green cards, including a Phantom Centaur but unknown to him the Italian two seats to his right, Andrea Paselli, had aiming for blue-green as well.

Unlike Nitter, however, Andrea had been picking both colours from the start. Since Judgement gave him a first look at the boosters than Nitter all the Norwegian got were the leftovers.

The deck is nothing to write home about and Nitter will need all the skill, and all the luck, he can muster to pull it through.