At the start of draft day at US Nationals 2002, Table 2 looked like a shadow of last year's Top 8: Alex Borteh and defending team members Brian Hegstad and Eugene Harvey.

Harvey opened an interesting Odyssey pack with Merfolk Looter, Mystic Enforcer, Shelter, Nantuko Disciple, and Sylvan Might. If he takes the Enforcer, he's passing quality green and white and setting himself up for a fight. If he takes the Looter, then, well, he's simply not taking the best card in the pack. With green/white becoming quite viable with the advent of Judgment, he took the Enforcer. 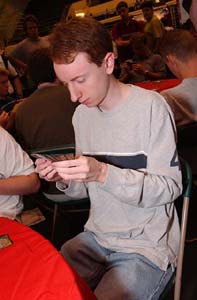 The problem was that Borteh first-picked a Call of the Herd and Melnikow a Werebear in front of him, and Gates took Overrun behind him. Green was going to be hotly contested.

There were no good green cards in pack 2 (How could there be if Melnikow took Werebear first?), so Harvey had to decide between Resilient Wanderer, Shelter, and Dreamwinder; he took the Wanderer.

His third pack seemed to indicate that blue and black were underdrafted: Repel, Ghastly Demise, Afflict, and Scrivener. But Harvey stayed the path and chose Shelter. His next pick was Embolden (over Leaf Dancer), and then was faced with the choice of Diligent Farmhand or Aven Cloudchaser. To this point, the only green cards he had been passed were Leaf Dancer and Zoologist, and he had to decide right here whether or not green was going to be a part of his deck or just a splash for Enforcer. He chose the Cloudchaser, resigning himself to look elsewhere for cards.

The next pack contained a Crashing Centaur, a Scrivener, a Blazing Salvo, and a Reckless Charge. He took the Charge and was looking to be W/R/Enforcer. The rest of the pack gave him a Kirtar's Desire and an Abandoned Outpost and two Ravaged Highlands to help splash the Enforcer.

Melnikow had cut green so hard that not only did Harvey abandon it, but Gates did as well, giving up on his Overrun to play blue/black.

Harvey's first Torment pack was a no-brainer: Fiery Temper over Pyromania, Pardic Collaborator, and Soul Scourge. The only other tempting card was Hydromorph Gull, but he decided against it.

His second pack contained another Gull, a Waste Away, Aquamoeba, and Faceless Butcher (Gates took Sengir Vampire). Harvey looked hard at the Butcher, but settled on the only white or red card in the pack, Hypochondria.

After that, Torment went quite well, giving him another Fiery Temper, a fourth-pick Violent Eruption, two Petravarks, two Mystic Familiars, a Sonic Seizure, and a Strength of Isolation.

When Judgment began, Harvey opened the quintessential pack for that set: all green and white. His choices included Sudden Strength, Vigilant Sentry, Serene Sunset, Brawn, Nantuko Monastery, Anurid Barkripper, Battlefield Scrounger, and the rare Mirari's Wake. He admitted to being tempted by the Wake, but took the best white card, the Sentry.

He followed that up with two more Sentries (choosing the third one over Valor), and it looked like his deck would need threshold badly. With pick four he chose Phantom Nomad over Browbeat (he doesn't like that spell), and then he got a gift Arcane Teachings with pick 5.

With pick six he took a Book Burning, which will help his quest for threshold, and then rounded out his deck with two Benevolent Bodyguards, two Funeral Pyres, a Cagemail, and a Prismatic Strands. Adding levity to his card pool are a pair of Soulgorger Orggs that he nabbed with the 43rd and 44th picks of the draft. Don't expect him to side the Orggs in unless he faces a particularly bad defensive deck.

Harvey is pleased and claims the draft went well. He should have no trouble casting the Mystic Enforcer off three sac lands, and he looks to be in decent shape as far as getting threshold, something W/R can have trouble doing. I look for Harvey to go 2-1 and be in great shape for another Top 8 run.